When my friend Kris suggested we take ourselves on a do-it-yourself writer’s retreat, I told her she was a genius. We are both writers in our forties and, like so many people in midlife, everything in our lives is growing: careers, children, those piles of unread library books on the nightstand. She’s a fundraising consultant who has shifted most of her professional work to writing. I’m a writer and music-thanatologist, which means I play harp and sing for people who are dying.

I’ve been around end-of-life care long enough to know that the best place to find happiness is in the here and now, making time for the things, and people, you love. While writing makes me happy in a way that little else does, it is difficult carve out that creative space. As poet Mary Oliver writes, “The most regretful people on earth are those who felt the call to creative work, who felt their own creative power restive and uprising, and gave to it neither power nor time.”

It’s easy to promise ourselves we’ll get to our writing later, when the children are in bed or the taxes are done, only to find our to-do lists have no end, and never did.

When Kris and I decided to commit to a weekend writing retreat, I suggested that we go to Martha’s Vineyard, where my husband and I have a house that we use in the summer but is mostly empty in the winter. We talked about dates, and backup dates, and also backups for the backup dates. Once our retreat was on the calendar, we anxiously waited for weather or illness or spouse calendars to force us to cancel. Nothing did, not even my worries about being away from my young son for two nights. My husband planned an exciting weekend complete with a movie and a boat show, and my son hardly noticed as I packed my bag to leave.

I first met Kris in 2001, when we shared an upstairs apartment in an old two-family house just outside Cambridge, Massachusetts. I was a graduate student at Harvard Divinity School and she worked for a large nonprofit in downtown Boston. One night I woke up to hear her running up the stairs to my attic bedroom. “Wake up, Jen!” she yelled, “I think the house is on fire!” Panicking, I wondered if I should carry the harp outside with me. What about my boxes of photographs and journals? By the time I pulled on jeans and a sweater none of it seemed important. I ran out empty-handed.

We stood on the sidewalk and watched as smoke billowed out of the downstairs neighbor’s locked screen door. They did not respond to the doorbell and when the fire department arrived we discovered that they had fallen asleep with food on the stove. There was no fire, just a ruined pot. For weeks, the smell of smoke lingered in our apartment, a frightening reminder to us both. There was no fire escape or hanging ladder on the third floor where I slept; if the fire had been real, Kris’s wake-up call would have saved my life.

A few days before our trip, Kris and I met for coffee to map out an agenda of solo writing time, craft discussions, goal-setting and readings. We were both a little too excited about the poster-sized post-in notes I brought along for brainstorming. On Friday morning, we sped down the highway toward the ferry terminal at Woods Hole, and I told her about an idea I’d heard on the “Happier in Hollywood” podcast, advice that movie producer Robert Evans had received. “You learn from success, kid – not failure. If you’ve only touched it once, a term paper, a temp job, hitting a homer, dissect it. Was it timing, focus, homework? Get to the core. Find the whys, the hows. That’s the key.”

As writers, Kris and I had plenty of practice worrying over the steps to failure. But success seemed random and uncontrollable. What would happen if we analyzed the steps we had taken to various successful publications? What would we learn about doing it again?

We arrived on the Vineyard around lunchtime, drove straight to my favorite diner and ordered avocado salsa, eggs, French Toast, and lots of coffee. At the house, I lit a fire in the wood stove and we made a brief timeline for the rest of the afternoon. After a few hours of solo writing, we took a cold walk on the beach at twilight and then came back to the house to make a simple dinner.

For the rest of the weekend, we found an easy rhythm of writing balanced with conversations about craft and goals. I worked for several hours to shrink an unwieldy essay and Kris helped me smooth out the final transitions. She was researching an article about mushrooms, so we stomped around the damp woods behind the house, searching out local specimens. We both thought that we could channel the shared humor and writing advice of our MFA of Two into a podcast, so we signed up for an online class to learn the basics and Kris wrote an introductory bio for show’s future website.

On the morning of our last day, we made a third trip to the diner, just before we had to return to the ferry. The server laughed to find out we were leaving; he thought we were regulars who lived on the island. But we had a life someplace else, and it was time to go back to kindergarten pick-up, lacrosse practice, and our never-ending email inboxes.

Kris had not exactly rescued me from a burning building this time, but she called my attention to something vital to us both: our writing lives and how we are going to live them to their fullest. After all, how do you know if your creative life is on fire unless someone wakes you up and invites you to look at it once in a while? Her idea for a do-it-yourself writer’s retreat cleared out the smoke of my every day routines and helped me set real goals for the coming months. Those three days of giving “time and power” to our creative lives made us both so happy that we have decided to build on our success, and we just put another retreat on the calendar. 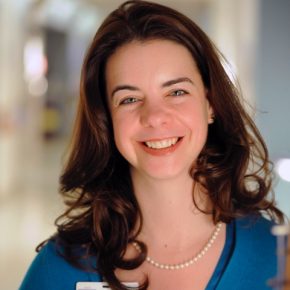 Jennifer L. Hollis is a writer, music-thanatologist and the author of Music at the End of Life: Easing the Pain and Preparing the Passage. Her articles and essays have appeared in the New York Times, the Washington Post, The Progressive, the Christian Century and other publications. She is at work on a book about what she has learned (and refuses to learn) from her work in end-of-life care. Jen has a master of divinity from Harvard Divinity School, where she previously served as an assistant director of admissions. She lives in Somerville, MA with her family.