In this month’s column Nina makes an unusual call for the end of a friendship. Do you agree that this friendship is doomed? Nina is always taking anonymous questions here. And catch up on all the other letters Nina has answered here. 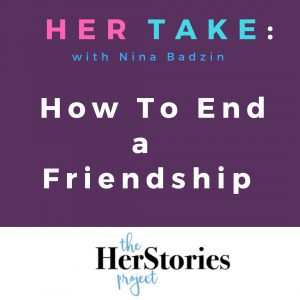 I’m writing to you because I’m unsure how to move forward from some serious arguments with my childhood friend of ten years. I live a state away from her, and over the years our communication has deteriorated. I find it very hard to be open with her about the events in my life due to the many explosive calls I’ve received from her.

In one instance, she told me that I don’t deserve to be happy before she is happy. Furthermore, all of our discussions have become about her and her struggles. I don’t mind being a support system for her, but whenever we do discuss my life, she’s judgmental and mean-spirited. Therefore, I have limited how much I see her and talk to her, which has angered her to the point where she believes I don’t make her a priority.

The thing is she’s right that I have made her less of a priority, but that’s for reasons other than our disagreements. My life has become very busy with all of the responsibilities I have to juggle as well as a recent family emergency.

In our most recent argument, I had called her out for meanly phishing for information. What really angered me was how I was trying to tell her how uncomfortable she made me feel; yet she took offense to me calling her out for bullying me and told me she won’t ever give me advice anymore—instead she wishes for me to fall on my ass. Lastly, she told me I shouldn’t play the victim all the time and she shouldn’t have to apologize all the time because she has been through more problems than me.

She revealed to me that she no longer trusts me. However, I have not trusted her in a long time. Overall, I agree I’ve avoided her and made her feel like I’m not in her life. But I have apologized for this. Yet, I don’t like the way she makes me feel. I admit I have not been the perfect friend, but I also feel that she refuses to be accountable for all of the things she’s done and the way she’s talked to me that has made me distance myself from her.

I’m always afraid of hurting her feelings. How do I talk to her? Is it wise for me to take a break from her? Is there a way to for me to get her to realize it’s impossible to open up to her because she makes me feel like I will upset her? I always feel like we are walking on eggshells. I am afraid of losing a friend, but I’m also afraid we can’t move forward. Should we even be friends?

Thanks for any advice,

Not Sure I Can Continue This Friendship

Dear Not Sure I Can Continue This Friendship,

The answer to your final question, “Should we even be friends?” is clear to me, though the method to get there will still be difficult.

You and this woman should not be friends. You need more than a break. You need a breakup.

If describing a friendship worth saving, you wouldn’t be using words like explosive calls, mean, bullying, distrust, fall on your ass, and egg shells.

If you find yourself saying, This is just too much, that’s because it is. It is too much. It’s too much pain, too much frustration, and too much effort. She should be telling herself the same thing. Because even if she technically started all this drama with the exploding at you on the phone nonsense, you have chosen to stay in the strained relationship, which set up an expectation that she can treat you this way. You wrote a few times about the way she makes you feel, but she’s been given little reason to treat you any differently since you keep allowing her to stay in your life. If someone calls you yelling and you continue to take her calls, she will continue to feel she can yell at you. Period.

I rarely say this concretely that a friendship needs to end because I like to believe there’s hope for people who’ve shared a history, especially from childhood. But in this case, I don’t see any reason to keep putting yourself and your friend through the agony. You’ve both stated a lack of trust. She has blatantly told you she doesn’t wish you well. I can’t find anything worth saving here.

Here’s the bad news: There is no easy way to end a friendship.

I’ve had emotional notes from people who’ve been ghosted, meaning their friends simply disappeared. The readers on the receiving end of a breakup like that wish the friend ending the relationship had written a letter or offered an honest reason in a face-to-face conversation. I’ve also have notes from readers who received such a letter or direct conversation and wish the friend wanting to end the relationship had found a way to fade away gracefully or “ghost” out of the blue. Some people don’t want such a direct goodbye. My point is that there is no “good” way to sever these ties.

From what you’ve described of your friend, a face-to-face conversation sounds like a bad idea as does the phone. (I know she lives out of town, but perhaps a visit had been discussed.) One choice is to write a letter explaining some of what you’ve written to me. You know you haven’t been a perfect friend and you value your shared history, but the need to walk on eggshells has become so difficult that the good memories and good times are now too far in the past. Something along those lines.

Another choice is to continue what you’ve already started, which is to fade away. Maybe you take longer and longer to return calls and texts. Maybe you interact less with her social media accounts than you do now. (Assuming you are interacting with them now.)

You have my sympathy. The task ahead isn’t easy. Although I can’t tell you how to end the friendship, I do feel certain that you should end it.

Wishing you as painless of a break as possible. If that’s possible.

I’m sorry you’re going through this,