What should you do when you’re being excluded by friends?

UPDATE (2019): FIND NINA AND HER COLUMN AT HER NEW FRIENDSHIP ADVICE SITE

Our advice columnist Nina Badzin is back with a dilemma from a woman who moved to her husband’s hometown and inherited his less-than-friendly group of friends. She likes some of them, but one “mean girl” in particular seems determined to exclude our letter writer. 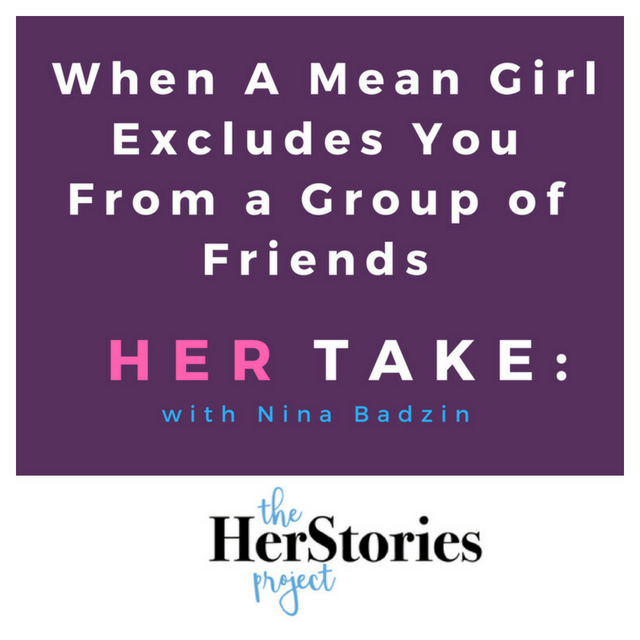 When my husband and I moved to his hometown, I knew nobody here. His group is generally very welcoming to all newcomers. I’ve seen strong friendships form among other newcomers and “old timers.” But as one of the first women in the group to have a baby, I was quickly left out. This was understandable (sadly) until other women also became mothers and still left me out.

For nearly a year, a “powerful” or at least “controlling,” woman in my husband’s friend group has been excluding me, pretty blatantly, since she too became a mother. My husband and I have no idea why. It is pretty clear to us that she’s trying to engineer the social group to exclude me. She plans things without including me and without my husband now too, by extension. They used to be good friends.

I do not feel I’m missing out on her friendship, but what upsets me (and my husband very much), is that she is trying to close the whole group off from us. My husband’s best friend has a fiancée, and naturally we two couples have grown closer as a group of four. The excluder is now becoming very buddy-buddy with this new fiancée, excluding me. It seems very deliberate. The fiancée is “new” and doesn’t realize this, of course. It is not her problem, but I can see how it will get awkward fast.

There is so much more detail, but it is too difficult to explain in writing. Basically, our group dynamic is getting messed up by a self-centered person who fancies herself an “influencer.” Having no other family or friends around and the reality of how difficult it is to start from scratch making friends as new parents who are busy with our children, this situation is really harmful to us. My husband is so angry and upset and has tried to find out what the deal is, but it’s a mystery. I am not close enough to Excluder to ask her directly. What should we do?

Tired of Getting Excluded

Dear Tired of Getting Excluded,

The Allure of His Friendship Group

The temptation to make your husband’s group your group makes perfect sense. Almost 18 years ago when I moved to my husband’s hometown, I was distraught when I realized he had no such group to make for an easy transition to my new town.

Although my husband (fiancée at the time) and I had spoken about that reality of starting over before we arrived in Minneapolis, I guess I thought he was being hyperbolic—as if by “no group” he meant, “only a few of them moved back to town or never left.”

Nope. He meant no friendship group, not even a small one. He had been living away from Minneapolis for a decade already, and although he had a few friends from the old days, I really did have to create my own social life. And it was hard. On the positive side, I can tell you now, 18 years later, I feel very much at home in Minnesota. And it did not take more than a few years. I promise.

I used to tell my new-to-town story with a “woe is me” slant, but now that I’ve read your letter, I’m going to stop telling it that way. Maybe it’s easier and better to start from zero; you get to make your own way with no expectations to be friends with people your significant other met at some point in childhood or adolescence.

Mean Girls and Being Excluded By Friends

I am thrilled you put “powerful” and “controlling” in quotes because in these cases of friend-group power plays, people only have the influence over us we hand them on a platter. Her power isn’t real. Her control also isn’t real unless you allow this situation to control you. She might control others’ actions, but you get to make your own decisions.

It’s time to stop hoping your husband’s group will become your inner circle. Excluder sounds awful, but what are we to make of these women who are following Excluder? I also think it’s time your husband make some new friends, but as I said, you can only control YOU.

I’m not even going to bother arming you with tips on dealing directly with Excluder. She’s a classic mean girl. I agree that it seems as though she doesn’t like you. We don’t know why. I want you to decide not to care. There’s no way you can ask her what her problem is without sounding paranoid or insecure. I want you to rise above needing an explantation from her. She would not likely tell you the truth anyway. She has her reasons and those reasons are her business. I am willing to bet those reasons are more about her than you anyway.

Listen, not everyone has good chemistry. There were all kinds of women who didn’t care for me when I moved to town. Some still don’t, I’m sure. I learned to make peace with the fact that chemistry is mysterious and things don’t always work out as we hope. Friend plates get full. We say the wrong thing one time and people don’t forget. Haven’t there been people you didn’t want to pursue a friendship with for reasons you could hardly articulate? I know that has been true for me. We have to allow others the same space. The worst thing you can do for your social life is overly focus on this one group of friends. It’s time to let this crew go, and start your search for real connections.

This was a great question to run by mom who is often-quoted in this column. She met my father when she was a junior at Northwestern and he was a grad student. While my mom had come to Northwestern from Rochester, New York, my dad was raised in the Chicago suburbs. She, like me and like you, ended up in her husband’s hometown. Here’s her advice:

“When I graduated from Northwestern, I had been married for a year. Suddenly my college friends left for other parts of the country, and I felt like I had no one left other than my husband—-no family and no friends. Tired of Getting Excluded needs to find new friends, and they don’t need to be in one particular group. She can join “mom and tot” groups. If she likes to exercise, she should join an exercise class. In other words, she should look for friends outside the “group.”  She can have a variety of friends who don’t know each other. She should pursue her interests and find others with similar interests. It takes a long time to form friendships. She needs to be patient and keep working at it. And she needs to be the initiator sometimes. Through the years, I often times was the one to pick up the phone and make dates. She shouldn’t wait for others to take the initiative. I still do that. If there is someone I want to be with, I make the call or email.”

My mom and I have The Initiator trait in common. If I waited for every friend to schedule a walk or a lunch or a couples’ outing with me, I would be waiting FOREVER. I actually think the key to a happy social life is adopting the initiator mentality and not keeping score—within reason. Meaning, if you’re making the plans with any particular person more than, say, four times, it may be worth letting that person know you’d love to be on the receiving end of the call (text, email, etc.) sometimes.

I hope this all helps. I wish you the best in your new friend making endeavor. It’s like dating, but better, because you get to keep as many of the good relationships as you want. I have a good feeling that some new close friends are out there waiting for you to find them.

Good luck and let me know how it goes,