Making friends in a new city as an adult is never easy. But as we get older, it gets even tougher.

We may meet new people — at the gym, at kids’ playdates, at work — but it becomes increasingly difficult to turn those acquaintances into friends. Our schedules are packed and less flexible, and our priorities change.

This month Nina Badzin, our friendship advice columnist, tackles the question of a reader who also faces the challenge of finding friends in an unfamiliar town. 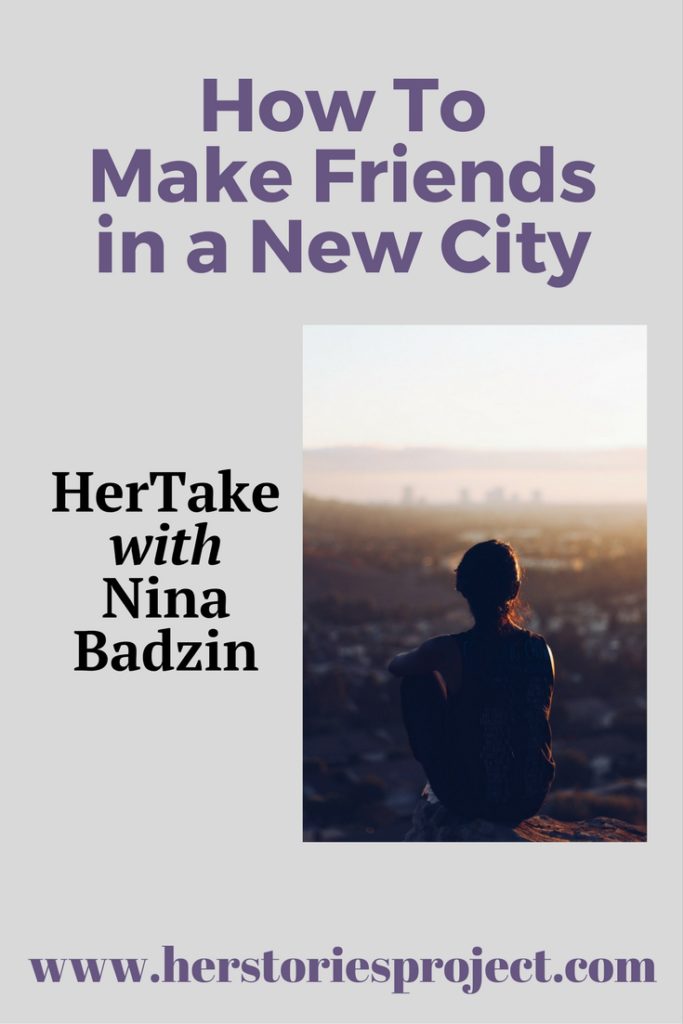 I have several close girlfriends, but not many who live geographically close to me. I had a difficult year last year welcoming a new baby while my husband traveled extensively for work, with little to no family support. I generally come across as a very “on top of things” person, so people often don’t think I need any help. But last year showed me I do need help! As our family plans to move in a few months I want to try to cultivate friendships where it’s not unusual to get together with friends for dinner, or to help one another out. Any tips on how to start from scratch in a new place with that particular goal in mind?

Making Friends in a New City

I love your question and your specific goal! In fact, my answer is on the longer side so it will be the only question we tackle here today.

No matter the number of friends we talk to on the phone, or via texts, emails, Facebook comments, Tweets, and so on, many of us are wired to see friends face-to-face. Let’s be honest, considering that even a phone conversation can seem rare these days, time together can be that much harder to schedule. As you implied with your question, however, it’s those face-to-face interactions that lead to the kind of friendship where you can rely on others in times of need and joy. Despite what Katherine Rosman reported in the New York Times last week about people who manage to find time for Twitter and Instagram, but can’t be bothered to return a phone call, there are still people who remember that nothing can replace the real connection of hearing a friend’s voice and seeing her face (not on your iPhone screen or in the form of an avatar).

Fourteen years ago I moved to Minneapolis without any friends. It took me a long time to feel settled, but I eventually made this city my home. I’ve also watched others move here through the years and marveled at how gracefully some transitioned despite the reputation among non-native Minnesotans that it’s impossible to make new friends when “Minnesota Nice” means “Minnesota Ice.” (I’ve also seen less graceful situations, but I’m going to keep it positive.) I’ll share my tips and some ideas from the women who arrived in town more recently.

I cannot talk about making friends in a new city without mentioning Rachel Bertsche’s memoir MWF Seeking BFF in which she chronicles her systematic effort of going on weekly “friend dates” for her entire first year in Chicago. Like you, Rachel had several close friends in other cities, but she missed having that support system nearby. While going on 52 outings with new friends over the course of a year only makes sense for a book deal, I think anyone can glean lessons from Rachel’s active approach of making friends in a new city, which was: Do not wait for friendships to happen.

While some people feel annoyed by the word “dating” in reference to making new friends, it is an apt description. Actively looking for quality friends is just like dating, yet in some ways much easier because you can have several friends who fulfill different needs in your life rather than seeking a “perfect” match. I think the biggest key to making new friends in a new city is to accept the fact that she who is interested in new friends is the one who must make the effort. Fight that fact, and you will still be asking this question in five years. Harsh but true.

Clara* moved to Minneapolis two years ago and she’s already one of my closest friends. She’s managed to achieve what you’re looking for in terms of asking for help and providing help to others. She’s always carpooling with other families to birthday parties, organizing play dates at her house, or sending her kids to someone else’s house. Clara’s willingness to ask for help has influenced those of us in her midst to feel we can ask, too.

I asked Clara how she settled in so quickly. “Do a lot of hosting,” she said. She hosted dinners and brunches for families from her kids’ classes and her social life grew from there. She didn’t wait for invitations, nor did she feel entitled to tit-for-tat reciprocation. If someone who’d been to her house for a meal reached out to meet for coffee or a walk, Clara considered that invitation a great result from her hosting efforts. She didn’t eliminate women as “friend potential” if they didn’t have her family over right away.

Julie is another newer friend of mine. She moved to Minneapolis a bit after Clara, and she did so without kids. Furthermore, her job gave her no immediate connections to potential friends because she works from home. We met after getting assigned to the same table at a benefit for an organization we both care about, and at some point after that we got together for lunch. (Lunch was Julie’s idea despite the fact that I’m seven years older and a mom of four.) I later invited Julie and her husband for dinner, and some time after that she had the six of us over, too. (Brave!)

I asked Julie for her number one tip. “Making friends has to be a priority,” she said. Even if she didn’t feel like going out to a particular event, Julie forced herself to go simply for the opportunity to meet someone new or to deepen a connection with an acquaintance. Clara added on the same subject, “If someone wants to set you up with a new friend, always say yes. Worst case and it’s a bad match, it makes for a good story.”

While it’s tempting to look for people who remind you of your long-distance friends, I would keep yourself open to anyone no matter their age and stage in life. (Julie inviting me to lunch is a great example.) That means that if you get an invitation to a family’s house, but they’re much more or less religious than you, have signs in their driveway for candidates you abhor, or don’t seem like “your type,” give them a chance anyway. Instead of worrying “why” you would possibly hit it off with a potential new friend, ask yourself “why not.”

4. Get Out of Your Comfort Zone

I recently learned of a friend-making app called Smile Mom from my friend Ellie, who moved to a new city six months ago. Ellie saw another woman post on the app that she was also new to town and had nobody to invite to her two-year-old’s party. This woman was hoping that others would show up to the party she’d planned for her son at the park. Talk about getting out of your comfort zone for all the individuals involved! Even though Ellie’s kids are several years older, Ellie, also brave in this scenario, showed up with a small birthday gift and hit if off with a few of the other woman who also showed up because of the app. I love that in this case technology brought people together instead of allowing everyone to stay behind a screen.

For MWF Seeking BFF, Rachel took an improv class, started a cooking club, a book club, tried different exercise options, and even asked a waitress who seemed like good friend potential for her phone number. The key here is that she didn’t rely on just one method to make friends. I’d also consider volunteering and even offering to lead committees. It’s a great way to learn more about your new community.

5. Accept the Reality of The Friend Plate and Chemistry

There’s no getting around the fact that some people’s friend plates are already too full. I’ve met women new to town as great as Clara and Julie, but I only have so much room in my life for new, close friends at any given time. And of course the issue of chemistry comes to play, too. I think the best policy is to not take things too personally if a relationship does not get beyond the surface. Just keep going and a few friendships will deepen to the level you’re looking for.

Readers: What advice would you add? Do you know people who excel at making friends in a new city? Have you seen situations where certain tactics haven’t worked at all? Please share!

Also, remember that our contact form is anonymous. While we have several questions waiting for answers, we are open to more. And your question might even get discussed on the radio!