We are thrilled to present our first advice column with Nina Badzin today! HerTake: Practical Tips for Modern Connections is a monthly column in which readers can ask Nina questions they have about navigating relationships in an era of social media, blogging, and online connections. The topic for our first column is relationships in crisis or transition. Nina answers two reader questions today—we’d love to hear your thoughts and any other advice you might add in the comments! 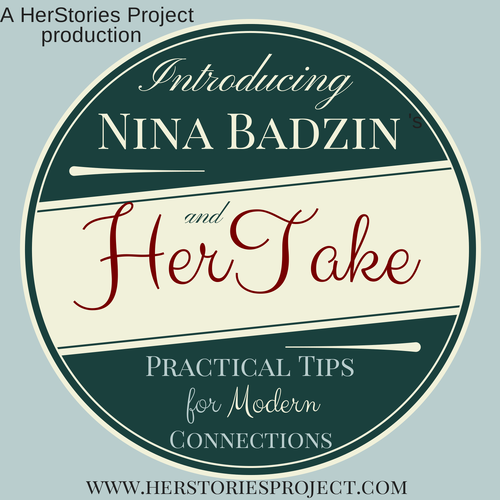 How do you know when a friend really wants to stay in touch? We were friends for three years before I moved out of state. Once I moved we spoke several times a year, but she never initiated. We are friends on Facebook, but I consider that a passive friendship. Receiving a ‘like’ is not the same as a phone call.

I sent her an invite to my daughter’s Bat Mitzvah; she never responded. I knew she probably wouldn’t come, but she has relatives in my state, and I wanted to extend the offer. She, in turn, invited me to her son’s Bar Mitzvah. We didn’t go, but I did RSVP.

I called a mutual friend who lives in her state (that I have a similar type of relationship with) and then suddenly that day the original friend sent me a message on FB. I responded with joy and asked to make a plan to speak on the phone. She never responded, but she did ‘like’ the pictures of my kids I posted over the weekend.

So: to call, again, or not? To send a holiday card, or not? Why reach out and say she was thinking of me, when she had no interest in actually speaking to me?

Sick of This Long Distance Limbo

As my husband once told me, friendship is a game of tennis, not bowling. When you bowl, the ball easily comes back to you. In tennis, you need someone to hit the ball back or you would look like a lunatic trying to race to the other side again and again. Like with friendship, there’s no game without a partner. Not that friendship is a game.

No offense to my husband, but writer Maria Popova of the popular site Brain Pickings found a better way to reflect on this situation of an unengaged or one-sided friendship in her review of Andrew Sullivan’s book Love Undetectable: Notes on Friendship, Sex, and Survival. I recommend the entire article, but I will share a portion of one of Sullivan’s quotes that Popova highlighted in her review.

“Unlike a variety of other relationships, friendship requires an acknowledgement by both parties that they are involved or it fails to exist… Friendship uniquely requires mutual self-knowledge and will. It takes two competent, willing people to be friends. You cannot impose a friendship on someone, although you can impose a crush, a lawsuit, or an obsession. If friendship is not reciprocated, it simply ceases to exist or, rather, it never existed in the first place.”

In this case of your long distance limbo, I would say your friendship did indeed exist while you lived in the same town, but it’s clear to me that your former friend no longer wishes to stay in touch now. I’m willing to bet this is not even personal; rather, it’s a function of the fact that you were friends for three, not thirteen years before you moved. I imagine you both have childhood or college friendships that also require the work long distance entails. Perhaps the connection that the two of you had of three years was not enough to keep her engaged for the long haul now that you live apart.

You asked how to know when a friend really wants to keep in touch. To me it’s simple: you know because she calls, emails, and sends texts, and so do you. I have friends from high school and college that I do not speak to often, but if too much time passes, you better believe that I pick up the phone or send an email with genuine interest on what’s new in their lives. I’m not sure I could make the same effort for a friend that I’ve only known for a few years when my long distance slots are already taken. I would probably stay in touch via Facebook likes at that point, not because I didn’t enjoy and appreciate the friendship while it existed, but because reality dictates that time is too limited to stay in touch with everyone.

You also wanted to know why this former friend would reach out in that Facebook message if she doesn’t truly want to be in touch. My guess is that she felt guilty when she heard you spoke to the mutual friend. For a moment she decided it would be nice to reach out, but she couldn’t stick with that plan long enough to respond when you wrote back. I would not see her Facebook message as a desire to keep in touch, but more a desire to let you down easy.

We do not know why this friend decided to let the connection with you fade out, but I want you to ask yourself why you would want a friendship of any kind with someone who did not RSVP to your daughter’s Bat Mitzvah? You seem like someone who is willing to do your part in a friendship. That lack of a simple, “We are so sorry we cannot attend, but thank you for including us,” is beyond comprehension. Nobody says she had to come, but to forgo the most basic etiquette and not at least check the “no” on the RSVP card is rude and mean-spirited. At that point the question was no longer whether she wanted to keep in touch with you, but whether you wanted to keep in touch with her. And that answer should have been no. I don’t know you, but I know you deserve better treatment than an ignored invitation to such an important family event.

As for what to do at this point, I would let the friendship stay in Facebook “like” pleasantness if you don’t mind seeing her updates. If seeing her news bothers you at all, then hide/unfollow her (do not unfriend her as that is too aggressive in this case) and make this new Jewish year about finding a great new connection in town.

Perhaps the HerStories community has another take or additional points to make?

Hope the conversation is helpful! Nina

I have a friend who was there for me during a very difficult time in my life, one where I needed to vent regularly. Since that situation has thankfully resolved, I’ve found that every time I talk to this friend, she’ll include a little dig about me, like about my housekeeping abilities, or the terms of endearment I use for my children. It makes me feel very uncomfortable, and it makes me not want to keep in touch with her (she lives in a different city).

I’m so grateful for all the listening she did for me when I needed it, and I don’t want to just walk away from our relationship, but I don’t appreciate being put down every time we talk. I think it’s more about her personality than a deliberate attempt to be mean. I’ve always avoided confrontation like the plague, but I’m not sure that’s the best idea in this situation. What should I do?

Thanks for some thoughts,

Tired of the Digs

Dear Tired of the Digs,

I think it’s safe to say that being there in bad times is a basic tenet of friendship. That said, some friends are especially good at sticking with you throughout a low period. Perhaps a friend is particularly attentive because she has suffered in her life, which makes her more understanding of the next person’s need to analyze a situation for months or even years. It could be that in this case your friend was an excellent listener because she was also in pain and felt palpable relief from her reality by focusing on yours.

Nevertheless, no matter how much this friend helped and listened or why, you do not owe her a free pass to criticize you. She is continuing to give you advice even though you are no longer asking, which is her way of letting you know the areas in your life where she disapproves. I don’t blame you for feeling fed up with the unwanted commentary, especially over such minutia. What is to her what you call your children or how well your house is organized? They are not her children, nor does it sound like she lives close enough to spend much time in your home. I can only imagine the judgments she’s passing on more compelling matters.

I understand why you’ve lost the desire to keep in touch. A long distance friendship takes so much time and effort if you’re going to do it right. (By doing it right, I do not include merely “hearting” each other’s pictures on Instagram.) Conversation on the phone is key, and if that conversation is laced with digs, I think you have to decide how much confrontation you can handle to make it stop.

I believe you have three choices.

How will you decide which choice is right? I think that depends on whether you believe she is capable of changing. If you think she is, then it’s worth trying #3 the next time she says something rude. If not, then I would go with #2, starting with the fade back and moving to a fade out if things don’t improve.

I hope that helps! Maybe others in the HerStories community will chime in as well.

Have a question you would like to see featured in October?

To celebrate the release of the HerStories Project’s book My Other Ex: Women’s True Stories of Leaving and Losing Friends I am continuing with the theme “friendships in crisis.” Just know that here at HerTake I am always open to questions focusing on relationships online and in “real life” with all the modern issues that come up these days, even ones particular to writers and bloggers. What do you if you’re always commenting on a friend’s blog, but she never returns the favor? What if you meet a blogging friend in real life and all the good chemistry you have online disappears in person? What if your spouse’s family hates your blog? You get the idea. Submit questions on the anonymous contact form, and feel free to include your email address if you’d like a response from me even if we don’t have space for your question.