“Oh look, the commie has arrived.” “Hey, let me introduce you to my one lefty buddy.” “Here comes the snowflake, we have to watch what we say now!” These are just a few of the comments that have been directed at me from some of my more—how shall I put it?—slightly-right-of-the-Kaiser family, friends, and acquaintances. Most of the time, I take the ribbing with a grin and let it roll off my back, but occasionally it strikes a nerve; that’s when inner-Jenn—the rebel, the actual social justice warrior, the little girl inside me who still wants to change the world—flares to life like a Molotov cocktail exploding in an alcohol-soaked bar.

Sometimes I wonder how I find myself being friends with people whose beliefs are so fundamentally different from my own, and who are so unaccepting of the beliefs I hold dear.

And to be clear, I’m not talking about differences of opinion on, say, the deficit, or the electoral college process. I’m talking about humanism, the very embodiment of the Three Musketeers’ rallying cry “all for one and one for all,” and how we treat the least among us, regardless of how they got that way. This leads me to wondering if and/or why any of these differences of opinion matter, but also wondering how I got to be the way I am, and why I think and feel the way I do.

In the current era of President Trump, political affiliation does seem to matter, even among the closest of friends and family, with supporters and opponents arguing virulently and sometimes violently, with relationships ending or being fraught with tension. In part, this seems exceptionally foolish to me – a relationship should be based on more than politics, no? On the other hand, if the people you’re closest to do not accept, or worse, intentionally insult your values and the way you live your life, why on earth would one continue in such an unhealthy relationship?

Emotionally, it feels like we are living in the most polarized generation ever.

I don’t know if that’s true, but it surely feels that way.

From my earliest days, I can remember learning the lesson that there will always be somebody worse off than us, somebody who needs our help, and that it’s our duty—as Catholics, and as humans—to do what was in our power to help these people. I grew up poor, but my mom still found money to put in our church envelopes each week, and we still donated our gently used clothing and linens and such, first to a group of nuns who lived in a “bad” neighborhood and worked with the residents therein, and later to an agency which operated halfway houses and a shelter that aided the homeless, recovering addicts, and domestic violence survivors.

I can recall driving there to the agency with my mom on countless occasions. In the 1980’s and 1990’s, their headquarters were in an old building in a run-down neighborhood not far from where we lived, and it was always dark and dank and intimidating. My mom would tell me not to be nervous, that these people were grateful for the help and would not harm me. I mean, she was right, but when you’re a kid? It’s still a little overwhelming.

Always though, when we would pull up, we’d have our minivan loaded with boxes or bags, and a few grizzled, scraggly-looking men would come over to help us carry our donation inside. I was the picture of naiveté, and was always a bit wide-eyed during these excursions, but looking back on them now, I’m so grateful for having had these lessons driven home. In hindsight, I can see how integral these experiences were toward creating my worldview.

Add in decades of living and working in some seriously depressed neighborhoods, seeing some of the truly awful things humans can do to each other, losing my faith, finding it again, going to church, abandoning organized religion, and reading extensively about the human condition and the history of “civilized” man as an adult with life experience behind me, and you get present-day me: wanting to feed all the world’s hungry, and house the homeless, and save the addicted, and educate and rehabilitate those behind bars, and provide an education to anyone who wants one, and  give people who need it the medicine they need at no cost, et cetera, et cetera, et cetera.

Because my desire to help includes people around the world, I have been called a communist, a socialist, a globalist, a libtard, un-American, a dirty hippie, and many, many other meant-to-be-unflattering terms, both online and to my face.

For the most part, I grin and bear it. If such remarks come online, that’s pretty much an instant “unfollow” or “unfriend,” meriting no further response from me, with a “block” if it comes from someone aggressive and threatening. In real life though? There is virtually no point in arguing—it makes me upset, and in very few of these cases do I care enough about the other person to want to bother attempting to change their mind. Do I let these differences come between family and myself? Not intentionally, no, but I do tend to gravitate towards people who aren’t going to insult me.

As Ghandi said, “Be the change you wish to see in the world,” so I do my best to live each day in a way that betters someone other than myself. It’s a small act in most cases, but it’s what I can do, my contribution to improving this earth we all share. Imagine if everyone who could did just one small thing for someone else, with no strings attached?

Can you imagine the positivity and progress that might bring about? I’ll do what I can, and continue to be the best example I can for my children, and hope that those who disagree with me someday see me with love and not disdain. 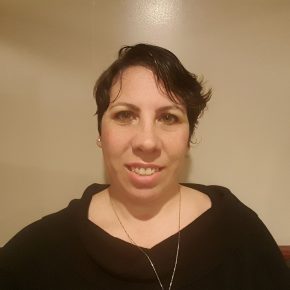 A Staten Island girl living in a suburban New Jersey world, Jennifer is a stay at home mom to two young boys, but she is also a historian, a wife, a daughter, a sister, an aunt, a friend, a genealogist, and the ringmaster of the circus she calls her life. She survives, without a doubt, on coffee and laughter.