In this month’s column Nina addresses two issues. Should a friend be expected to get in the middle of two other friends’ tension? And she also covers some thoughts on invitation lists for big parties. Nina is always taking anonymous questions here. And catch up on all the other letters Nina has answered here. 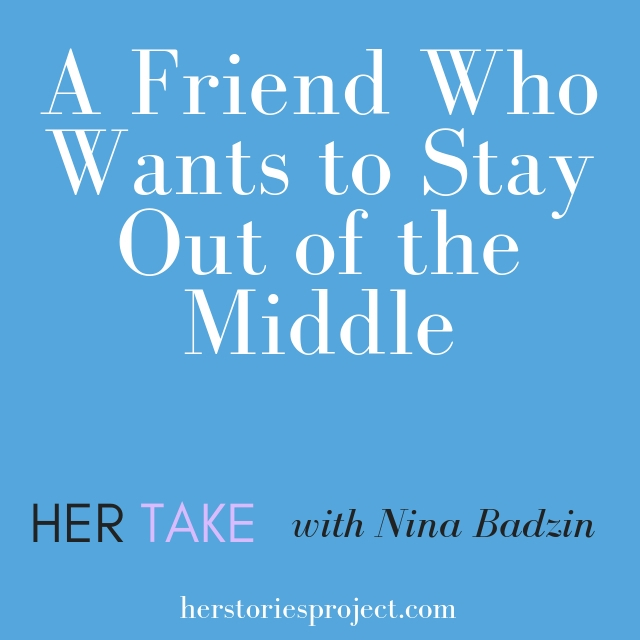 A few years ago, I introduced a longtime, dear friend to an acquaintance as I thought they would have a lot in common. As it turns out, the women connected and their husbands really connected, and the two couples became fast friends.

I invited both couples to my son’s Bar Mitzvah, but only invited the children of the longtime friend. The acquaintance-friend was very upset and shared her feelings with my longtime friend.

Fast forward to after the Bar Mitzvah. The acquaintance no longer speaks to me if she sees me, yet she and her husband go out with my longtime friend regularly. I tried to make amends with the acquaintance to no avail.

The question: I confronted my longtime friend, letting her know that it would have been nice if she had told me the issue before the Bar Mitzvah as I would have included the children rather than cause any upset. She had no explanation, nor has she ever tried to intervene to help the relationship. I feel betrayed by my longtime friend, especially when she talks about the acquaintance. Any advice?

This is a tough one because I see why you’re upset.

#1. You made a great friend match for the two women, but it seemed to backfire. Nobody likes that, even people like me who get a real thrill out of connecting people to each other.

#2. Anyone planning a party needs to set boundaries on the invitation list or the sheer number of guests would make the party less fun and way less affordable.

And yet, despite having every right to be upset, you will have to make the choice to let your longtime friend off the hook before any moving forward can happen.

Nowhere in your note did you say you want to drop the friendship. Assuming you want to stay friends with Longtime (that’s what I’m going to call her), you either have to be okay with Longtime setting that boundary of not getting in the middle, OR, you have to talk to her about it again and understand that she may feel you’re asking too much of her.

I want to rewind a moment and remind you (and all of us!) that it’s okay for people to be disappointed with us. Meaning, the acquaintance’s disappointment doesn’t mean you did anything wrong. And just because you wish Longtime would have intervened then and even now, it doesn’t mean that she agrees with you or that she made the wrong call. It’s clear she doesn’t feel it’s her place to get in the middle. I’m not saying she’s right or that you’re right. I don’t really know. But if SHE feels it’s not the right thing to be in the middle, then you have to accept that if you want to put this behind you. One extra point to make: I would argue that Longtime never should have told you that acquaintance was upset about the party. Because that WAS getting in the middle and not in a helpful way. It only served to make you feel bad about a party that was already underway.

As usual I consulted a few of my best advisors for my own dilemmas.

Taryn, my best friend from childhood said this: “I’m going to give Looking to Move Forward the same advice I give you sometimes. Don’t assume to know what was said between your longtime friend and the acquaintance. Staying out of it might have been your longtime friend’s way to stay loyal to both of you. Time to turn the page.”

I agree with Taryn that there are simply too many assumptions here. What if your acquaintance wasn’t feeling a deep connection with you before the bat mitzvah and just used that as an excuse to let things drift? There’s really no way to know.

My best friend from college, Rebecca, pointed out that if this acquaintance was truly upset about her kids not being invited then she was bound to get upset with you over something small some other time. Maybe you dodged a bullet. It’s totally inbounds not to invite the children of all your friends, acquaintances, colleagues, and so on to an event that is a special milestone for your child. Rebecca also said, “Don’t relive something that happened only once.” In other words, continuing to think about this event gives you the false sense that Longtime has wronged you many times when it was just this one event. (And whether she was wrong is still up for debate.)

And of course I consulted my mom.

“As hurtful as it is, it’s not reasonable to expect your old friend to give up the friendship with the acquaintance or to intervene. I remember something similar happening in my own life. I had a huge blow up with an old friend, and somewhere in my head I was hoping that some of my close friends who knew her would not be friends with her anymore. I kept the thoughts to myself, but felt that my friends had picked sides by staying friends with her.  After some time, my friends were no longer friends with the person I had fought with for some of the same reasons I could not get along with her. So who knows how this will all play out in the future.”

I hope we were able to help you move forward. I sympathize with the situation as did Taryn, Rebecca, and my mom.