The idea for HerStories Voices came from teaching our personal essay writing class. We were blown away by the quality of the writing from our students, and we wanted a way to recognize in our own small way that kind of writing: stories by women about the moments — big and small — that shape our lives.

We can’t wait to share this first story with you by writer and teacher Rachel Furey. This essay spoke to me (Jessica) as an introvert, as a sibling, and as a romantic. It’s about the discoveries that we can make when we don’t put ourselves in the spotlight. We love Rachel’s clear, self-aware voice.

Don’t forget to check back in two weeks for our next Voices essay and for an announcement about our next HerStories Voices call for submissions… We think — and hope — you’ll like it! 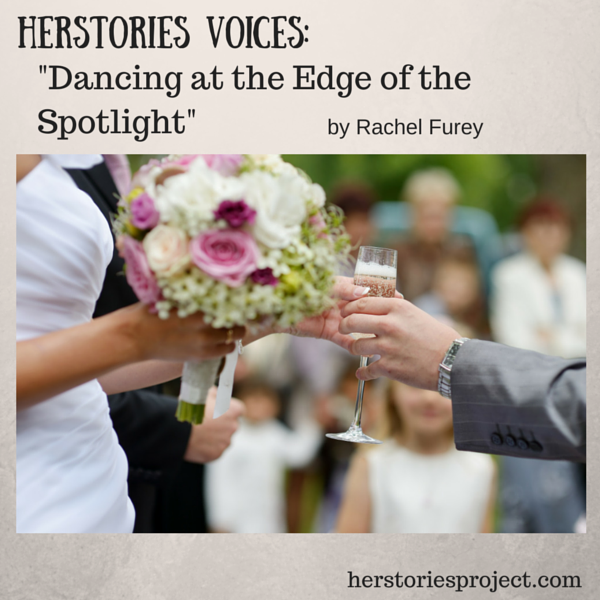 I’ve always been quiet. Not just in the sense of being soft-spoken. I also avoid the spotlight at all costs. Or, if we’re sticking to the light metaphor, I even do my best to stay out from under porch lights.

I’m the sort of person who refrains from taking a ticket for door prizes. If someone insists, I squeeze the ticket in my sweaty palm and pray my number isn’t called. Once, when our birthdays became the numbers through which door prizes were earned, I lied about my birthday to avoid having to standup in front of twenty people and pick a book as a prize. And I’m a writing instructor. I dig books. I know how crazy this all sounds, but instinct kicks in and this is the sort of thing that happens.

In second grade, I threw-up during our morning assembly. Right in the middle of “America the Beautiful.” Vomit was running all down my hand and arm, dripping to the floor. And I still couldn’t say anything. I just stood there like a vomit fountain while everyone around me continued to sing and the kid standing next to me shot me a crooked smile that either meant he was really into the song or he thought I was the most messed up person he had ever seen. I stood there until a teacher finally discovered me and led me off to the nurse.

My life is full of moments like this. I once played three plays of an intramural basketball game with a cut above my eye, blood easing its way down my cheek because I didn’t want to be that person who stopped the game—didn’t want that college kid with the first aid kit taking a good long look at me while everyone on the court watched on. When I came down with shingles in my late twenties, I hopped onto my bike and rode to the doctor because it was easier than calling up a friend and saying, “Hey, I have this weird rash that the internet says may or may not be shingles, so do you think you could give me a ride?”

The biggest fight I ever got into with my sister was over a school assignment that required interviewing a dozen people. Neither of us wanted to do it. We cranked out papers like machines—we went on to graduate first and second in our class—but interviewing people, now that threw us for a loop.

During my freshman year of college, when I felt like I had a dozen older sisters—what I’d dreamt of for so many years—I wrote my own version of “’Twas the Night Before Christmas,” put the names of my dorm-mates in it and taped it to their doors at four in the morning when no one would be awake. I didn’t sign my name. I wanted them to know they were loved, but I didn’t want them to know that it was me who adored them so much.

In ninth grade, when I read To Kill a Mockingbird, my favorite scene wasn’t one of the courtroom ones or even a moment with Scout. It was that scene toward the end of the book when Mr. Tate tells Atticus he can’t go “draggin’ [Boo Radley] with his shy ways into the limelight.” I had to close the book for a minute. I’d never felt so understood. I couldn’t believe that someone actually got it.

But don’t mistake this to mean that I altogether abhor the spotlight. I’m human. I want to be a part of the big moments. I crave adventure. I even like being noticed on occasion. So when my brother and fiancé asked if I’d get ordained and be the one to perform the ceremony at their wedding, I said ‘yes’ even though it meant a spotlight moment.

Sure, I was nervous as all hell. It was my brother’s big day. It was a bigger life changer than the high school graduation ceremony at which I had to make a speech. If I blew it, I was tarnishing the start of something special. I’d have families on both sides to answer to. I wore a black shrug for a reason: to hide the sweat.

I stood on the edge of a golf course under a wedding arch. The flowers woven into the arch’s frame bobbed in the breeze. My brother stood beside me. We were in front of the audience—on the stage, so to speak—and the beginning was perfect because not a soul looked at us. They were all staring at the bride. My brother threw a shy smile my way and then watched his soon-to-be wife come down the aisle. When the bride arrived and my brother took her hand, the two of them—both taller than me—hid me. In a good way. In the pictures, you can see my head below and behind their chins. I was like the set for the climax of a Tony award-winning play.

My voice cracked at first, and I could tell I wasn’t loud enough. No surprise there. I squeezed the binder that held my script. I kept reading. My tongue started moving more smoothly. As my words found an even pace and cameras flashed, it occurred to me that I was in the spotlight in the very best way. I was dancing at the edge of it. My words were coming out, but they didn’t matter half as much as the people in front of me. So it was easy to keep talking.

At the edge of that spotlight, I got to see things no one else did. I saw tears slip down the bride’s face, saw my brother’s eyes track those tears, heard the bride’s sniffles, my brother’s shoes shifting in the grass beneath us. I handed over the rings, caught the fine tremors in their fingers. I was close enough to smell the flowers above us. I was close enough to hear both of them breathing. At one point, I swore we all locked eyes. All three of us. I know that’s pretty much impossible to do, but that’s what I felt dancing at the edge of the spotlight. 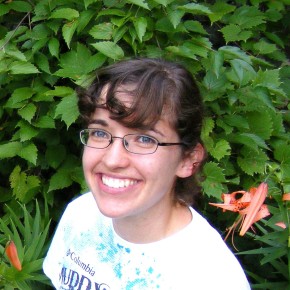 Rachel Furey is a Writing Instructor at Lincoln University of Missouri. She earned her PhD from Texas Tech and her MFA from Southern Illinois University. Her work has appeared in One Teen Story, Hunger Mountain, Crab Orchard Review, Fifth Wednesday Journal, Chautauqua, Women’s Basketball Magazine, and elsewhere. She is a winner of Yemassee’s William Richey Short Fiction Award and Sycamore Review’s Wabash Prize. Her story “Birth Act” was listed as a Distinguished Story of 2009 in Best American Short Stories.