Today’s question for Nina comes from a blogger struggling to take an online friendship offline. Here’s what she’s really asking: What’s the secret to turning an acquaintance into a friend? 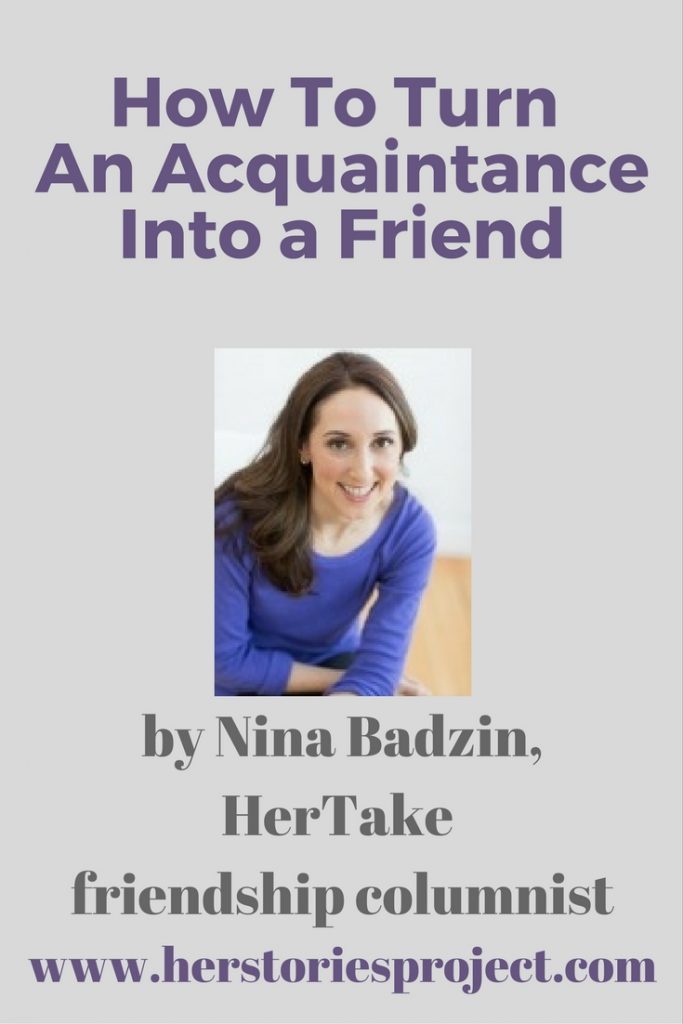 Nina is always accepting anonymous questions so keep them coming!

Another blogger (let’s call her Anna) and I follow each other on Twitter and Instagram and on each other’s blogs. Although I comment far more on Anna’s blog than she does on mine, I get the sense through our writing that we have a lot in common. I especially get this sense when Anna periodically initiates a quick comment to me on Twitter or Instagram. In those cases she’s obviously proactively gone out of her way to reach out, even if slightly. I was doing this a lot myself in her direction initially, but I got the feeling that I was being overbearing, so I dialed back.

Anna and I happen to live less than 25 minutes apart, and I’d like to get together. I see her publicly comment to other folks on social media (who live much farther away) that she’d love to meet up some day, and in some cases she has done so with bloggers in our geographic vicinity. She’s never suggested anything like meeting up with me though. I’m afraid that if I suggest a quick coffee or something, I might rock the apple cart or seem like I’m stalking her and the pleasant acquaintanceship we have now will vanish, which I don’t want either. I’m so terrible at reading signals in real life, so via the internet is even harder! Advice?

Trying to Take the Next Step

Dear Trying to Take the Next Step,

This is an excellent question and it really has nothing to do with the internet or blogging though the online relationship adds an extra layer of easy, quick intimacy and therefore confusion. More than the online issue, however, I want to focus on the idea of turning an acquaintance into a friend.

I suspect that many of us have experienced what you’re describing. I have certainly felt that pang of rejection that comes from watching someone who seems like good friend potential connecting with others, but showing no interest whatsoever in me. It’s the kind of situation that can leave one wondering, What’s wrong with me? Why not me?

Why do some acquaintanceships deepen and some stay on the surface forever? There’s no exact answer to that question because any of the following or a combination is possible: chemistry, timing, or simply one’s friend plate being too full at the moment.

You’re correct that some of this takes an awareness of signals. I think you’re better at reading them than you realize. The fact that you dialed back from commenting so frequently on Anna’s social media happenings when you noticed a major imbalance tells me you’re paying attention to cues. I would never endorse a tit-for-tat approach to online or offline relationships. However, when your gut tells you that you’re consistently putting in far more effort, it makes sense to spend some of your reading and commenting time elsewhere. That goes for offline relationships, too!

IF YOU WANT TO HANG OUT WITH ANNA, YOU HAVE TO ASK.

There is truly only one way to know if Anna is open to getting together: You have to ask. It’s entirely possible that these other bloggers who have been out with Anna are the ones doing the asking. Maybe Anna is particularly magnetic and people tend to seek her out. It doesn’t mean she won’t have room for you, but it is more likely that you will have to take the initiative.

And when I say, ask, I mean specifically state what you’re hoping for and provide some options. I say that because when an acquaintance says, “We should really get together!” I hear, “blah blah blah.” On the contrary, when I hear, “Send me a Tuesday or Thursday that you’re free for coffee,” I hear, “I want to be your friend.”

A REAL LIFE EXAMPLE OF TURNING AN ACQUAINTANCE INTO A FRIEND

Beth became my good friend after she blatantly pointed out (in an email) that we have tons of friends in common and she couldn’t see any reason why the two of us did not have a friendship of our own. She added that she always enjoys talking to me when we run into each other and that she would love to see me on purpose. Then she offered some lunch dates. I found Beth’s honesty and directness utterly refreshing. I responded with, “You’re right. Let’s do this.” We met for lunch several times without any of our common friends in tow. We exercised together every so often the next year, and had play dates with our kids at some point after that. Now I can’t remember a time when Beth was not a trusted friend, but it probably would not have moved out of the acquaintance phase had she not reached out and had I not reached right back.

IF ANNA DOES NOT REACH BACK

The reaching back is where things can get murky, and I know this is what you’re fearing.   After you ask Anna if she’s free for coffee or lunch and offer specific dates, you might get something back like, “Would love to! Things are so crazy right now. Let’s touch base after spring break.”

Before you allow yourself to fall down any kind of shame pit, let’s give Anna the benefit of the doubt. She may truly be too busy to commit to a date right now and prefer not to schedule out too far knowing that she could have to cancel. I would try one more time after spring break in a case like this, but if at that point you can’t get her to commit, it’s time to move on with no hard feelings.

Here’s where you will have to keep reminding yourself that any lack of interest on Anna’s part is likely not personal and truly just about the factors we already discussed, namely, timing and the friend plate being too full. I brought up chemistry before, but I think it’s worth mentioning that even good chemistry is not always enough to overcome the anxiety over spreading oneself too thin.

If Anna does not reach back, you should not feel bad about yourself (she hardly knows you), nor should you worry that the pleasant online relationship you have will change. That piece is in your hands. As long as you don’t act wounded over the situation or entitled to her time, I don’t see any reason why the good rapport you two shared would change.

A good acquaintance, either online or offline, is not as special as a good friend, nevertheless, she can still be a value-add to your life. As far as I’m concerned, this can be a win-win situation.