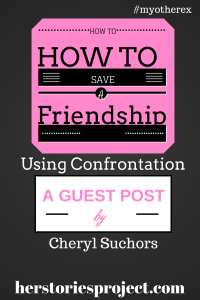 Today we have a guest post from one of the contributors to My Other Ex: Women’s True Stories of Losing and Leaving Friends. Cheryl Suchors‘ essay for My Other Ex is called “Going Without Sugar.”  It’s about the painful and confusing end to a long friendship. Her guest post today is about what happens when we put the spotlight on a friendship and confront the issues in this relationship.

Linda had disappeared. From my life, I mean. She didn’t call or email anymore. She had no time to get together when I asked. She and her husband were going through a rough patch and I knew work kept her busy. But I wasn’t happy. Tired of waiting for things to improve, I found myself in that place where the hurt of missing her had morphed into being angry enough that I began to back away from the relationship myself. Perhaps you’ve been there, too?

But good friendships take years to develop, and I didn’t want to lose this one. Rather than slink away, I decided to step up. Which meant saying something to Linda despite the fact that I’d rather get a pap smear than confront a friend.

It took a couple of weeks, but I called her, my opening lines in hand. First, I listened—quietly but not patiently—to her grumble through the latest marriage grievances. When she finally paused for breath, I jumped in. “So what’s happening with our relationship anyway?”

My heart skittered. “From my point of view,”—I carefully acknowledged mine wasn’t the only point of view—“it feels like you’ve dropped out of our friendship because of work and things with Donald. You’ve become unavailable.” I made myself say this matter-of-factly, with no heat, despite my leaping pulse.

She surprised me. “That’s true! It’s true. And it makes no sense. Right now I need more connections because he’s my best girlfriend and all my eggs are in one basket.” She went on, giving me time to breathe, and to figure out what to say next.

I said we should each figure out what we wanted from our relationship. “Let’s think about it and then we can have another conversation.” This is going well, I told myself. We’ll meet a few weeks from now so I can hang up soon and go inhale some ice cream.

She surprised me again. “Let’s do it tomorrow.”

We met for lunch. As soon as we’d ordered our grilled fish, she began. “I don’t like walks where you’re time-bound because you have to pick up your kid. And walks with your little doggie, despite how cute she is, are not my idea of walks. Your attention is too diverted. It’s like having a little kid along and then all the dog people stop and talk.”

Well, how was I supposed to get the dog walked if I didn’t bring her with me? Who could not love Juniper? And Linda chatted more with the dog people than I did. Besides, this wasn’t what we agreed to talk about anyway. Was it?

Not that it was easy, but I reined in my defensiveness. “Okay. It saves time for me to walk with Juniper and you together, but I can see what you mean.”

My turn. If she could raise annoying habits, so could I. “Often when we talk, it’s as if everything is of equal importance to you—the seed in your birdfeeder, my surgery, the conversation you had standing in line at the Post Office, your mother. I don’t like spending so much time focusing on trivia. And I feel like I have to work to squeeze my topics into the conversation.”

She looked straight at me. “Oh, you’re very good at taking care of yourself.”

“What’s that supposed to mean?” I refolded my napkin. Thought about throwing it at her. Took a few breaths. “Let me ask you something. When you tell me things, do you feel heard?”

She considered. “Not always. Sometimes I feel like you’re not . . . attending.”

I had to laugh. “You feel like I squeeze my stuff in all right but don’t really pay attention to you and your stuff?” She nodded. I leaned back in my chair, grinning, and threw up my hands. “I feel exactly the same!”

Linda found this pretty funny, too. Friendships, we decided, must follow a universal formula. We each want to be, as Linda had put it, attended to. And we want it in the exact proportion to which we feel we are giving it to our friend who doesn’t, not nearly enough anyway, return our generosity.

I wasn’t finished. “Listening to you I often feel myself being sucked down this giant rat hole. I have no idea why we’re going there, I just know it’s not where I want to go and I can’t see how it’s meaningful to either of us.”

“You’re so busy all the time whirring around, so tight on time with so many balls in the air, you never have enough time. I have an associative thinking style and you have a more curt—”

“Okay. Where’s the waitress anyway? I never got my cranberry juice.”

We paused to regain our equilibrium. I suggested we create a code word, something each of us could use to signal the other was doing the thing that drove her crazy.

“No way. Too pejorative. Plus it only describes my end of the issue.” She thought some more. “How about ‘time/object’?”

“What on earth does that mean?”

We ping-ponged suggestions back and forth until dessert arrived. “I’ve got it!” Linda cried. Her eyebrows lifted and her eyes opened wide. “Rat-whirr!”

But is it a verb? You’re rat-whirring again?”

Linda guffawed. I howled. “Or, no, a noun. ‘Help! I’m the victim of a ratwhirr!” We doubled over, pounding the tablecloth. “Then there’s the adjectival form. ‘This has degenerated into a most ratwhirrish conversation!”

From then on, our negotiations flowed. I agreed to leave Juniper at home on our walks. Linda agreed to keep our phone conversations shorter and more to the point. She would call more often. I would attend better when she did.

Working hard at being clear but not angry or defensive, restating the other’s position and using humor had brought us back together. “I think we’ve done a damn fine job on this friendship business,” I said. “To us!” I clinked my water glass against her juice.

“Compared to what I’m going through with el husbando, this was cake,” Linda said.

I smiled. I didn’t mention her tap-dancing right foot. 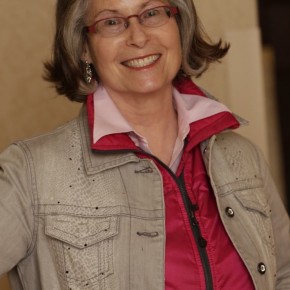 Cheryl Suchors came to writing after a career in business, and her work has mostly appeared in literary journals. At age forty-eight, she decided to climb forty-eight mountains. Her nearly finished memoir (surprisingly titled 48 Mountains) describes how hiking sustained her through cancer and the death of her hiking buddy. She lives with her husband and plants near Boston and visits her daughter, out on her own in Washington, DC, as often as possible. Cheryl posts about hiking, writing, nature and life on her blog, Go For It: One Approach to Living.