One of the joys of blogging for me has been finding online communities and friends who grow to understand my writing. Online friends — as Stephanie and I know particularly well! — can become your best and most valuable critics, supporters, listeners, and collaborators. When you find that special writing friend, as our HerStories Project contributor Lauren Apfel of Omnimom has, that relationship can help your writing grow. 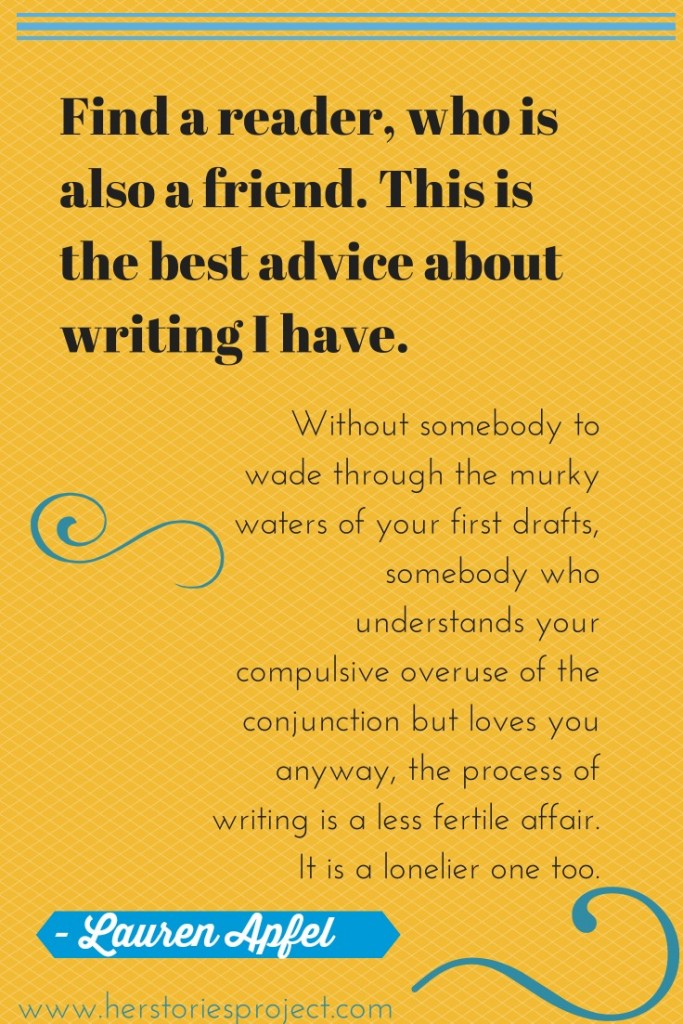 Find a reader, who is also a friend. This is the best advice about writing I have. Every book on the craft makes it plain. Without somebody to wade through the murky waters of your first drafts, somebody who understands your compulsive overuse of the conjunction but loves you anyway, the process of writing is a less fertile affair. It is a lonelier one too.

My friendship with Denitza is filtered almost exclusively through the written word. Emails, texts, comments, corrections, a seemingly endless cycle. If we lived at a another time, we would be called pen-pals. I can see us there, in a bygone age. I can see us in stiff petticoats, quills poised, spilling our innermost thoughts onto paper the color of fresh cream. I can see how the beauty of waiting for the post to be delivered would suit us more than the instant gratification of the internet. And yet, ours is a digital story through and through.

I hear Dentiza’s voice in my head sometimes, but only as a sound byte from the past. I know her emoticons and her preferences for the comma better than I do her inflections. We’ve seen each other a few times in the fourteen years since graduating college together, thanks to the strange coincidence that she married a man who grew up very near to where I did. The face-to-face is incidental: modern technology has built us a stronger bridge.

Denitza works full-time as a doctor and I am a stay-at-home mom. We both write non-fiction around the edges of our main commitments. I am trying to shift the balance of my commitments, though, to become a writer and not merely someone who writes. This isn’t straightforward. Writing, like any art, is as soul-crushing as it is soul-enhancing. Especially when you want to transform it, abracadabra, into more than a hobby. My writing has begun to bloom recently, but only through the cracks of my existence as a mother. And it was motherhood that led me back to Denitza in the first place.

We met again on Facebook, a re-kindling cliche for two people in their thirties. I found out she was pregnant from a mutual acquaintance and I emailed her because I was in the throes of new motherhood myself. It started slowly, our friendship, tentatively. There was something kindred between us, so much was obvious, not that we are similar people. What explains us best, rather, is what we share: an obsession with both parenting and writing. Even more binding is that we share a style of communicating about those obsessions: frequently, intensively, with no excuses.

No matter how hectic the week gets, we can always locate each other, physically as well as emotionally. Even when there is no time, there is time for this. In-between diapers, in-between patients, we tip-tap back and forth on our devices. We live our lives seven hours apart, but the time difference is a quiet advantage. I write in the mornings and then I wait for Denitza to wake up. My day starts again when the sun rises in Salt Lake City, though it is fast approaching tea time in Glasgow. My day starts again when she has read my latest draft and I can take the next steps to making it right.

Together we stepped into the blogosphere. I started a blog about parenting and Denitza started one about medicine. Self-publication, we learned all too quickly, is the easy part. It’s the attempt to break into the wider world that tests you. It’s the waiting for an answer and the wondering if you are good enough and the peeling yourself off of the floor when this magazine or that editor says you aren’t.

Some days we have “races to rejection.” We’ve both put the finishing touches on a piece and, hand in virtual hand, we fire them off into the ether. Then we wait to see who gets the first “best of luck placing it elsewhere.” What better way to scream into the wind of the New York Times submission process than to stand with somebody screaming next to you? What better way to take the sting from the “I’ll pass” email than to forward it on to your friend, who replies almost instantly with a “their loss”? And on the occasion of a hit, when the pickaxe strikes gold amidst the bedrock, the prize is parcelled out between us. We celebrate with each other the small victories. The rejection that came with a compliment. The one that came with an encouragement to submit again.

“Write without pay until somebody offers to pay you,” Mark Twain once said. “If nobody offers within three years, sawing wood is what you were intended for.” Two years down and I am not going back to the woodpile. Denitza wouldn’t let me. She has become a true partner in my effort to avoid this fate. She is more than a cheerleader and more than a second set of eyes. There is a joint ownership over our essays; we are like co-parents. One of us is the primary caregiver, but the other nurtures it just as much, feels just as invested in the topic, the theme, the construction, even if it means only getting home in time for the evening bath.

We are different kinds of parents, as many couples are. Denitza writes in a style she describes delicately as “vomiting on the page.” She is seized by an idea and the sentences erupt from her like lava, hot and messy and overly-long in their stream-of-consciousness. After the night she spends on-call at the hospital, I will wake to three or four essays stacked in my inbox. Or there will be none at all, she doesn’t do half measures. And then I will put on my heat-resistant gloves and begin the task of making them tidier.

My process is almost the reverse of hers. My essays start as a chunk of clay, thick and shapeless, which I whittle away at over time, as if I am sculpting a face. Different features are clear to me at different sittings: the curve of the jaw, for instance, or the set of the eyes; the punch of the last sentence or the perfectly illustrative anecdote. I write in short bursts and then I come back to tinker. Add a comma here, choose a better expression there. Denitza indulges my micro-management of the words, but she also challenges me on the big ideas. She saves me from indiscretions. Her praise is what I aim for. Her criticisms don’t make me feel less talented.

We parent the essays together and Friday is our well-deserved “date” night, because we both have the same chunk of free time. For me, it is after the kids are in bed. For her, it is after she has been on-call. I sit perched on the couch with my phone on my lap, waiting for it to buzz to attention. She texts me as soon as she gets to the French cafe downtown, a double espresso in one hand and my steady stream of messages in the other. We try not to talk about our “children,” the literary ones that is, but inevitably we do.

The funny thing is we weren’t good friends in college. We were thrown together in the first year, not in the same room but in the same suite, and we had people in common more than a relationship ourselves. Recently she reminded me of the summer after our sophomore year, of the hand-written letters that winged their way between Japan, where she had an internship, and New York, where I was killing time. Our first correspondence, the seeds were planted, but I don’t remember it. I am freezed by this fact. I was a different person back then, more selfish, more closed-off, a person who could write words that meant something to someone else and forget they had been written at all.

What did I ask, I wonder, what did she answer? There is no hope of re-discovery. As with so much else from those days, the paper trail has long since been lost.

Now there is a folder in my inbox with Denitza’s name on it, which holds the weight of all of the precious words from this incarnation of our friendship, those that have gone on to be published and those that will remain written, and read, simply for us. Every writer has what Stephen King calls an “Ideal Reader.” Someone who lives in your head. Someone who is the litmus test of what is clever or funny or interesting. Someone whose opinion matters more than anybody else’s. Denitza is my perfect reader. But she is also my midwife. Writing is like giving birth, Anne Lamott says. Theoretically you could do it alone, but it sure makes it easier to have a friend helping.

Lauren Apfel is originally from New York, but now lives in Glasgow, Scotland. A classicist turned stay-at-home mom of four (including twins), she writes regularly at omnimom.net. She is the debate editor and a contributing blogger for Brain, Child Magazine. Connect with her on Twitter and Facebook.