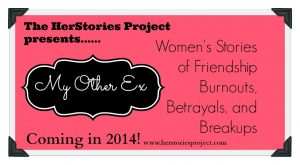 After we announced our call for submissions for our next book, My Other Ex, we started hearing feedback almost instantly. Women wrote us, “I have a breakup story I’d love to tell, but I’m not sure I’m brave enough,” or “I haven’t thought about this woman in years, and I can’t believe how many emotions are coming up.” Some of our past contributors have told us that they’ve begun writing a breakup essay, and it’s just so much harder than they expected. Here’s what we’ve heard from some of these writers:

Honestly, we’ve been experiencing the same thing writing our own essays; in fact, I (Stephanie) have written three different versions about three different friendships in the process of finding the right story to tell. I’ve emailed old friends, asking if they can remember specific details that happened nearly 20 years ago. I’ve cringed as old memories have drifted to the surface, and the accompanying emotions that I thought I’d buried long ago. One weekend, I firmly believe I made myself physically ill as I spent hours absorbed in my laptop and the caverns of my adolescent brain, astonished to realize how many long-forgotten moments made their way back into my memory.

To say the least, it is draining, uncomfortable, and yet somehow exhilarating to tell our old stories about friendship breakups. Why is it so painful?

For every woman there may be a different reason for why it’s so hard to talk about or write about the end of a friendship, or maybe a combination of many different ones.

Is it worth it to dredge up these feelings? Again, we turn to our contributors’ thoughts:

Both of us — Stephanie and Jessica — felt that sense of relief after writing our own stories.

We hope that this collection will allow women to realize that they are not alone in their feelings of confusion, heartbreak, guilt, and sadness. Most of all, through sharing our stories, we want to acknowledge the complexity of friendship.

We would love to hear your story. If telling the story is much more difficult than you expected, know that you are not alone. We encourage you to keep trying to write your story. We want this collection to help women realize that they are not alone in their intense and sometimes confusing feelings. It’s not a topic that is frequently talked about, and we’d like to change that.

We’ll be accepting submissions through early March. We’d also be grateful if you took our short, anonymous survey to help us understand more women’s experiences.