A friendship breakup is tough on everyone, often just as hard as a romantic breakup. How do you break up with a friend, with as little drama and hurt as possible? 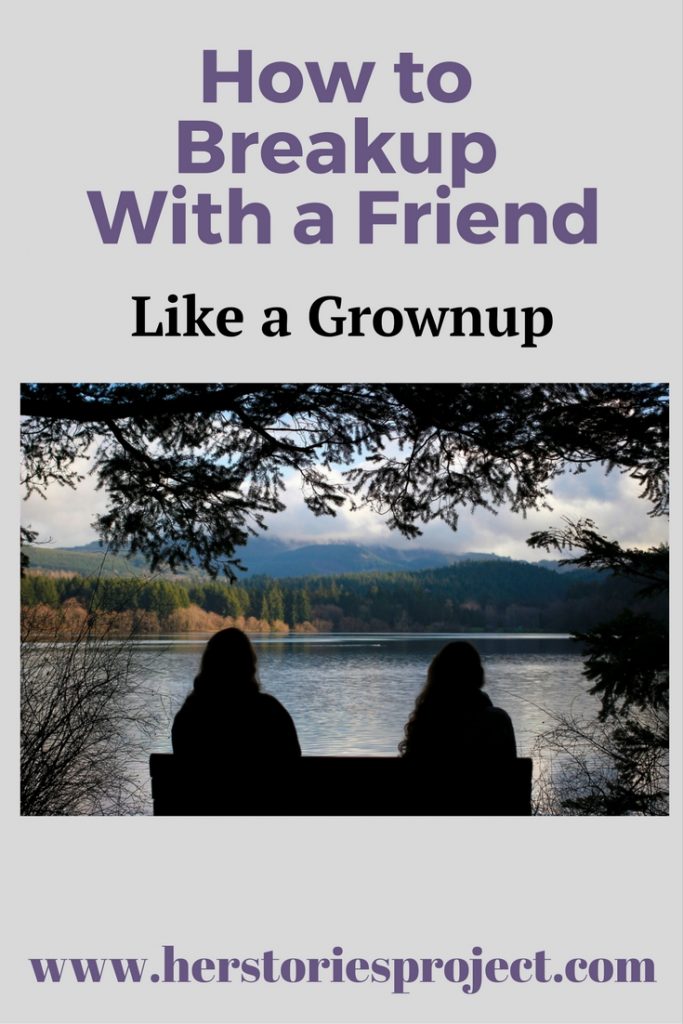 First, realize that not all friendships last forever. Friend breakups are common. The fact that you want to end a friendship — or a friend “broke up” with you — is not a reflection of your worth as a person.

(We published a whole book —My Other Ex: Women’s True Stories of Leaving and Losing Friends — of stories by women about their experiences with ending friendships and breaking up with friends. Through our friendship breakup survey, we’ve also heard from hundreds of women who’ve gone through breakups.)

Some of our relationships might be situational — you go to the same church or gym or your children are friends — and once it is no longer as convenient to meet up, the friendship becomes less close.

Next, make sure this is really something that you want to do. Are you getting less out of the relationship than you’re putting in? Have your previous attempts at mending the problems in the friendship failed? (Click here for 7 signs that your friendship is over.)

It’s also possible that, instead of a breakup, maybe what your friendship needs are new boundaries. (Our friendship advice columnist Nina Badzin answers letters frequently about this topic!) You can try to make the friendship more “casual” and less intense.

Most importantly, always try to end a relationship — whether it is a romantic or platonic one — with kindness and respect. This was once someone that you cared about deeply — and maybe still do — and they deserve that much.

Once you’ve made the decision — you want to end it and you do not want to keep the door open for future reconciliations — you have two basic options: fade away or initiate a formal end.

Fast or Slow: Which Is Better?

There are probably some who think that a friend always deserves a clear explanation for why the relationship has ended. In my view, that’s not always the case.

In these cases, the friend is usually not a very close — or best — friend.

What if you want to break up with a friend who is far more than a casual friend, one who you’ve been close to for a long time? Or what about a friend who doesn’t get the message when you attempt to “fade away”?

There are also times when a friend has betrayed you, and you want to be direct about why you’re ending the friendship. You want to be clear that you can’t be friends with someone when you’ve lost trust in them.

Be Honest and Direct

With these friends, you need to pick a time to tell them in a direct and truthful way about you want out. Think in advance about the time and place and prepare what you’re going to say. Would it make more sense to talk on the phone? Or get together in person? (In my humble opinion, you need to do more than just text.) Make it clear that you’re not asking for permission to end the friendship.

In your explanation, begin by telling them what has been positive about the friendship. What have you learned? What have you gained? What do you like about your friend?

Then — gently, kindly, but firmly — explain why this relationship is not working for you. Take responsibility for the breakup. For example, talk about why your needs or your schedule make this friendship impossible. Do not focus on blaming either of you for why things didn’t work out.

How To Break Up With a Friend: The Bottom Line

All friendships take work. But if your friendship isn’t nourishing you and making your life better, it’s okay to break up with a friend. Just do it respectfully.

Everyone deserves to be around people who want to spend time with them.