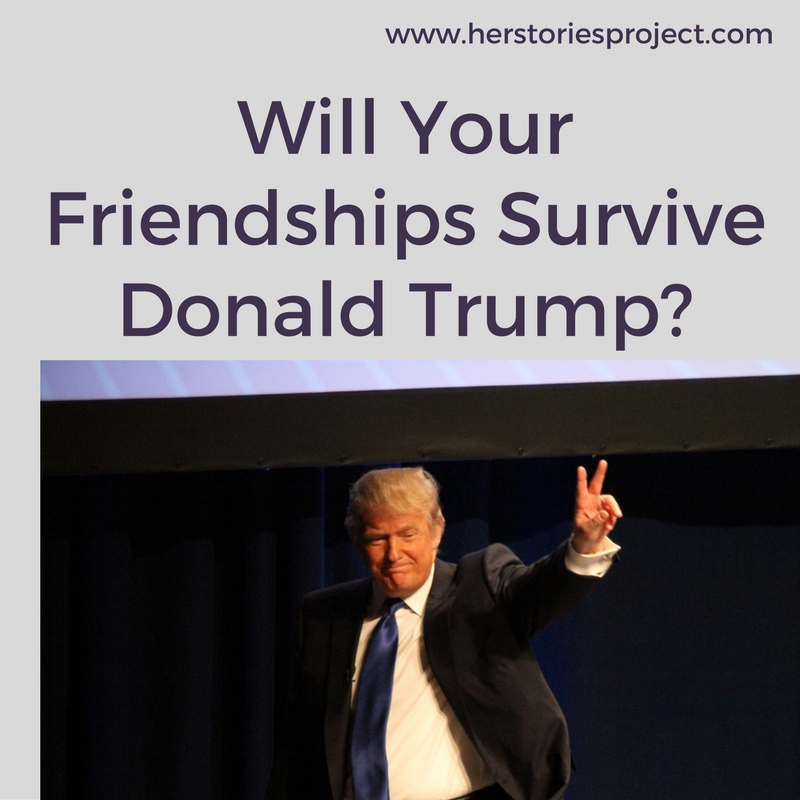 “I never considered a difference of opinion in politics, in religion, in philosophy, as cause for withdrawing from a friend.”

Yet Thomas Jefferson never had endure a campaign between Donald Trump and Hillary Clinton. What would he say about arguing over the Muslim ban? Or building a wall to keep out the “Mexican rapists” and criminals? Or fights about private email servers? Or bragging about sexual assault? Would the America of this election cause him to rethink this idealistic view of friendship?

What is politics, really?

Is it about differences in how to write the tax code, in how to interpret particular amendments to the Constitution, in how to eliminate the debt, in how to protect the environment, in whether or not to sign trade agreements?

Or is politics about something much bigger? About how we treat others who are different than we are? About the culture that we want to create for our children? About whether our country’s best days are behind us or right in front of us?

Is politics at its core really about — as a viral article (“I Didn’t Unfriend You Over ‘Politics'”) — nothing less than morality, decency, and humanity itself?

In that article, Jennifer Sullivan writes:

“I will not be made to remain friends with people who see [Trump’s] continued attempts at oppression and discrimination as an ‘inconvenient consequence’ of ensuring that their party remain in power. Because ultimately, if discriminatory practices aren’t a deal-breaker for you, if they don’t inspire in you a pain and an anger so heartbreaking that it leaves you aching for your less-privileged neighbor, then I don’t want to know you. And I shouldn’t have to simply because we shared the same floor freshman year of college.”

Our Friendship and Election 2016 Survey

During this campaign, I have struggled with these questions, and when we asked about this topic in our Friendship and Election 2016 survey, I was hoping that many of you had good answers. It turns out that most of you are just as confused and pained as I am about friendship and politics, for the first time in your lives.

I’ve been unfriended by relatives, I’ve cried when I’ve read words defending sexual assault from friends that I’ve formerly respected, and I’ve unfriended others who post positions so racist, so vile, and so uncivilized that I have begun to fear that I never knew my country at all. I’m certainly not alone.

About Half Lost a Friend

About 55% of the respondents to our survey told us that they have lost a close friendship because of the election. Nearly three-quarters have unfriended or unfollowed a close friend or family member on Facebook during this election.

Should You End Friendships Over Politics?

Respondents were evenly split on whether, even during this election, we should seek to listen, to respect, and to maintain friendships with friends on the opposite side of the political spectrum.

Another third of respondents were divided between those who welcomed dialogue and discussion and those who said that the best strategy was to avoid talking about politics altogether:

Some just aren’t sure. The last third of respondents said they had no idea at all what advice they would give about navigating friendships during this election.

I’m uncomfortable with these divisions. They aren’t good for our country or for our relationships. I don’t want to live in a bubble, only interacting with people who think like I do. However, more and more it seems that are political differences are no longer about genuine philosophical splits. They’re tribal. They’re about human rights. They’re about how we see the world and our fellow citizens. They’re perceived by many as a fight between good and evil — and the frightening thing to me is that I’m not sure that they’re wrong.

They are about so much more than politics.

Do you think that these divisions — within our country and in your own life — will get better after Election Day?