Like our HerStories Voices contributor Jackie Cangro, I am not one to initiate or encourage conversation in public places with strangers — on public transportation, at the library, in line at the grocery store. I’d rather be left alone in my (quiet) thoughts. It sounds, you know, unfriendly, to admit something like that. And sometimes I wonder if I’m missing out. So that’s why I love this essay about an unanticipated — and not necessary wanted — conversation. – Jessica

It isn’t often that I get a seat on the subway ride home from work. As luck would have it, today I am standing in front of someone who gets off at the Park Place stop in lower Manhattan. You can’t hesitate for a moment if you want to sit on a crowded train. Polite people stand a lot.

This gives me the opportunity to get engrossed in my book without being jostled. I’m nearly transported from the gritty bowels of New York City to antebellum Virginia when the woman to my left asks me a question.

“Do you know what this word means?” She points to solidify in her book.

“It means ‘to make stronger.’”

“I’m going to write that down in my book so I don’t forget it.” She flips the pages to the back cover to show me a long list of words on which she needed clarification.

We smile at each other and return to our books. I could tell you that I had warm, fuzzy feelings about this exchange, but that would be a lie. I could also tell you that my guarded nature developed only after moving to New York City fifteen years ago, but that too would be a lie. The truth is that even when I lived in the suburbs with grassy spaces between houses and expansive views of the sky, I was not one for idle chitchat with strangers. I’m not the person who will talk your ear off on the flight from Albuquerque to Atlanta or the one holding up the supermarket checkout line while telling the cashier my life story. I wish it came naturally for me to be one of those people who love people. Many New Year’s resolutions of my youth involved being more loquacious, but by January 5, I was exhausted.

That’s not to say I don’t try to be helpful. Need to know how to get to Harlem from Brooklyn Heights? I’m here for you. Want a hint on which hipster coffee shop has the most reliable Wi-Fi? No problem. But I’m not going to divulge personal shortcomings to a stranger on a train—the way this woman will in just a few minutes.

I nod at her, unsure what else to say, and give her my polite this-conversation-has-run-its-course look, but she hits me with another question out of left field. “How do you know if you’re a visual or auditory learner?”

The train rocks and sways under the East River heading into Brooklyn. As a captive audience in a subway car, I’ve learned that the worst thing you can do in this situation is to make eye contact. Even a hardened glare only serves to encourage some people. Yet something about her earnest question makes me look. She has a pleasingly round face and a shaved head with a five o’clock shadow. The lack of hair makes her pink lipstick stand out against her chocolate skin.

“I guess whichever comes easier for you,” I say.

“Which one are you?”

Now, this seems a bit personal. I glance out the window to see that we are only at Clark Street—a full six stops from home. There’s no way to end this conversation, so I know I have to let it run its course. “I suppose I’m a visual learner.”

“I’d rather read directions than hear them, for example.”

She writes this down on a separate piece of paper, under the heading ‘Visual Versus Auditory.’ It seems that she is also a visual learner; she just doesn’t realize it. Her smile is wide, and she gives off a kind vibe, not a creepy one. “Do you have any tips for taking tests? I’m always looking for tips.”

It’s been many years since I’ve taken a test. The last one, to complete my Master’s Degree, was the most intimidating of my life. We were given one essay question from each of seven courses completed and allotted one hour per question to write our answers in exam books. The proctor looked at us coolly as we entered the room, trying desperately to retain all of the information we’d memorized until we could regurgitate it on the page. She sighed. “Most of you will fail today and have to retake the exam next semester.” A fellow student leaned over and looked at me with a fierceness that comes from a combination of being sleep deprived and over-caffeinated. She whispered that we were going to make it through. I’d only had one class with her and couldn’t even remember her last name, but I believed her.

On the other hand, it wasn’t too long ago that I gave tests as an adjunct instructor at a local college. So I tell the woman next to me what I would have told my students. “Be confident and don’t second-guess your answers. Your first instinct is nearly always right.”

She smiles again—a big, broad smile that takes up her whole face. “Yes, I usually have good intuition. All my friends tell me that.”

She goes on to tell me how inspired she is by the book she’s reading and since she’s read all three books by the author, she doesn’t know what she’ll read when she’s done. Now she’s trying to read very slowly. She also thanks me for talking to her. “You know, every time I get on the train I ask God to put me next to someone smarter than me. I’m trying to learn all of the things I didn’t learn when I was younger. I know I’m kind of old for this. It’s not easy starting from scratch.”

“No, it’s not, but please don’t give up. It’s never too late.” I suddenly and deeply care that she not quit. I want her to dream big. I am prepared to dream bigger for her than she is allowing herself to dream. I know sometimes it’s the only thing that keeps you going—to feel that someone else, even a stranger, believes in you.

The train pulls into Grand Army Plaza, and I take my leave of her. In a fifteen-minute conversation with a woman I’d never laid eyes on before, and probably never will again, I’ve been reminded to trust my instincts, let my guard down, and remember the power of tenacity. All things on which my soul needed a bit of a refresher. 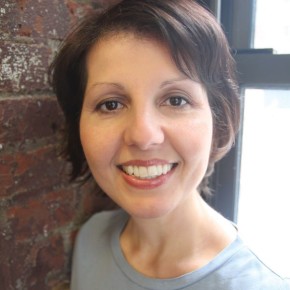 Jackie Cangro’s short story “Secrets of a Seamstress” was selected as a finalist in the Saturday Evening Post’s 2013 Great American Fiction Contest. Her fiction has also been published in The MacGuffin and Pangolin Papers, and her nonfiction has appeared in Narrative.ly, Prick of the Spindle, and History Magazine, among others. She can be found on her blog, on Twitter, and Goodreads. When she’s not riding the subway, she works as a freelance editor and creative writing instructor.