We’re so happy to present to you the second HerStories Voices column. This week’s essay is from Kathryn Wallingford. In Kathryn’s own words, her essay is about “rocks, remembering why I love Toni Morrison, and teaching my son to put apples in his pocket. How do we allow the continued growth of an imagination when we send our children to a system of order, structure, and real time? This is a mother clinging onto her son.”
For May, in recognition of Mother’s Day, we’re looking for essays about a moment or an experience during early motherhood that changed you. Our upcoming anthologies Mothering Through the Darkness: Women on the Postpartum Experience and So Glad They Told Me: Women on Getting Real About Motherhood both are about these early days, months, and years of new motherhood. Tell us your stories of about a “moment of change” as a new (or new-ish) mother! For more information about submitting to HerStories Voices, read here. Submit your motherhood-themed essays to us by May 1st! 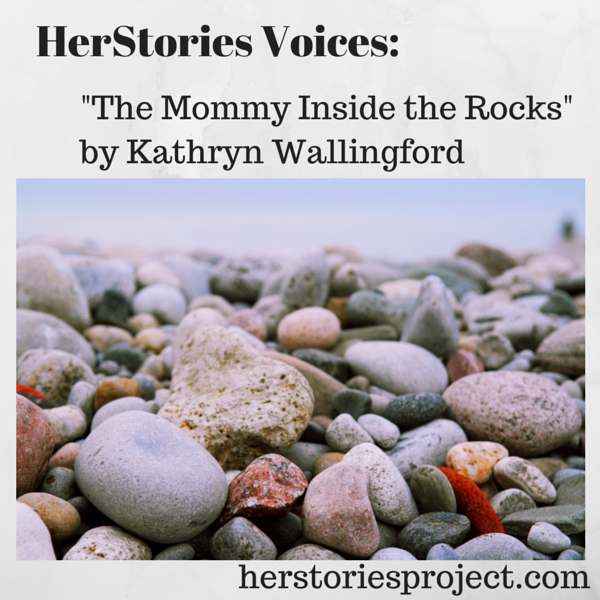 In the beginning, my beginning, I marked time with a rock in my pocket. The smooth glass of the eastern shores. The Bright Angel shale reminded me of the hot Arizona sun. I stole the granite of Wyoming and lined my freshman dorm with pieces of Appalachian quartz.

Eventually the rocks were thrown into one box. Sand, dirt, silt, and clays sifted together. They were the hot desert air, those cool Montana nights, and the Himalayan sunset, bounded and carried from home to home.

Until finally my four-year old found them.  One cold, winter day they made their way into his hands.

“Can I paint on them? Can I give them to my friends at school?” he asked.

With no hesitation, I replied, “Of course.”

What else was I saving my memories for? To be thrown on another window sill?

So he pulled the rocks out one by one.

It was his Mommy Before.

I tried to tell him the life behind each rock so he could be there too. In the 5 years that he has been on this earth I have had two additional children. As a result, I have been pregnant for approximately 550 days, a nursing mother for almost 720. He deserves to know this Mommy.

The Mommy inside the rocks.

As he paints I also remember how much I love these places. But it is hard to describe what he can not see. His Mommy before. I do not have many pictures to correspond to the collection.

He picks up the rocks one by one and his questions multiply.

“How cold was the lake? What did the lake look like? Were you scared? Did you want to jump? What did it feel like? How big was the mountain? You climbed into a canyon? Where was Daddy?”

The questions seem to exhaust him too. Moving away from my stories and the rocks and my geology 101 lesson, he begins to create a picture of his own. He goes into his own world and I migrate to the laundry pile that needs to be folded. But he soon comes to me with his creation.  His work is red paper smothered in glue and white dots.  I make out my name. I make out his name.

“It is a rocket ship taking us to the moon and people are throwing snowballs at us,” he answers.

I am not sure how my rock collection gave away to the artistic expression or how to explain if snow could or could not land on a spaceship.

This was his understanding of our conversation. A new world has came alive.

He has started kindergarten and real time replaces the abstract. School supply list- a plastic, red folder. 24 twistable Crayola crayons. Room- # 223. Rules- three warnings and then time out. “Zero-voice” in halls. 10:45 am- lunch. Curriculum- Science and Math in Spanish. Reading and Writing in English. Estoy contento. There is a correct way to say contento. He will be corrected.

Before his first day he asks me how to open a 3-ring binder. There is a correct way to do this too. By the end of the day he is tired. There seems to be less time to chat and rummage through a box of rocks.

In her poetry collection, Life on Mars, Tracy K. Smith writes, “We move in an out of our rooms, leaving our dust, our voices pooled on sills. We hurry from door to door in a downpour.”

I read this and think about how badly I am getting drenched. My forgotten voice, my racing legs. Where am I going? In and out. Drop off kids at school. Change dirty diaper. Nurse the baby. Time to cook, for who else is going to cook?  Cook dinner. Stop, snap a picture.

And now he has homework. He knows the bad kids and the good kids. He joins the race. The downpour continues. We both get drenched.

We race for explanations and for the finite moments, to explain and to store memories. When are we left to imagine, believing in what you can not see?

As a teenager I read Toni Morrison’s Song of Solomon when I heard about Heaven’s Gate cult mass suicide.  Thirty-nine individuals from Heaven’s Gate took their lives with the belief they could reach an alien spacecraft following the comet Hale-Bopp.  I watched the news coverage from a condo in Steamboat Springs, Colorado. It was my spring break. I obsessed over the news reports when I was supposed to be snow skiing. I tried to imagine the world was really going to end.  It seemed crazy. It seemed unimaginable.

But as I dismissed the cult members as lunatics I read Song of Solomon engrossed with the character of Pilate, the woman born without a navel. “She was a like a large black tree,” Morrison writes.

I tried to imagine such a woman. I remember feeling small and that the world was large. I did not know how 39 people could kill themselves. I did not know if a woman could really be born with a smooth stomach.

I was 18 and and my world was being deconstructed.

And now here I am again. I have a five year-old to remind me to raise my eyes a bit. To look a little farther. He needs to see outside the present moment. He wants to see a dinosaur. He wants to know how you get to heaven. On an airplane? I need to get him there. Life past our five senses.

I pick him up for school and he tells me about the fire drill and sings, “Down by the banks where the watermelon grows…” It is his favorite from preschool. He tells me about the school rules and what he had for lunch. I watch him fasten his seatbelt and we drive in silence.

When we get home I put away the book bag and the homework and we walk outside.We dig at ants, we suck on popsicles. We smell cut grass. The sound of rockets in sky become catalyst for the microcosm of the unknown. He asks if the rocket ship can see us. He asks if I would rather be a bird or a rocket.

What a damn good question! I tell him a bird.

He begins to climb our crab- apple tree.

In two years, he will probably not want me to watch him climb the tree.

In five years, he will have soccer or band or art practice after school.

In ten years, he will have his driving license. He will not want to climb the tree.

In fifteen years, he will will likely be living elsewhere.

He sticks an apple in his pocket. I do not tell him that the apple will not fare well in this pocket. He finds another apple to store away and climbs closer to the sky. 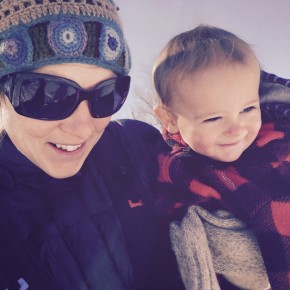 Kathryn lives in Lexington, Kentucky with her three sons and husband. On good days she writes about religion, mothering, and the natural world. You can find more of her work in Brain, Child and Literary Mama. Visit her blog at http://thisisenough.weebly.com/