Many of you may have followed Stephanie’s viral post, “I’m Glad They Warned Me,” and the resulting social media campaign that we announced a few weeks ago, #SoGladTheyToldMe. We were absolutely blown away by the support and feedback from readers, and we want to thank all of you so much for supporting the social media movement and the efforts to change the cultural dialogue about motherhood by sharing your own photos and stories. We’ve received almost a hundred photos from mothers sharing their #SoGladTheyToldMe messages, and more keep coming every day!

Since the campaign’s launch, Stephanie was interviewed by The Chicago Tribune, WGN Radio, The Huffington Post, and was on live TV with 9 News Denver. Websites in Australia, Canada, and the UK have featured their own stories on So Glad They Told Me.  We have been genuinely moved and inspired by all the women who have come together to share their truth and present a broader, more realistic view of motherhood, all while providing support and compassion to other moms.

To celebrate, we’re having a big social media blitz on Tuesday, February 17th. We’re inviting moms everywhere to take photos of themselves with their signs and share them all over social media that day with the hashtag #sogladtheytoldme. Post your messages (you can just share your sign without being in the photo yourself, if you prefer!) on Instagram, Twitter, and Facebook. To make an even bigger impact, change your profile picture on Facebook on the 17th to show your support and raise awareness.

We’re also having a Twitter party on the 17th at 9 PM EST where moms can share their photos and their stories, and bloggers can share their own #SoGladTheyToldMe blog posts. The HerStories Project will be giving away an Amazon gift card AND announcing our next book topic and call for submissions. Don’t miss it! 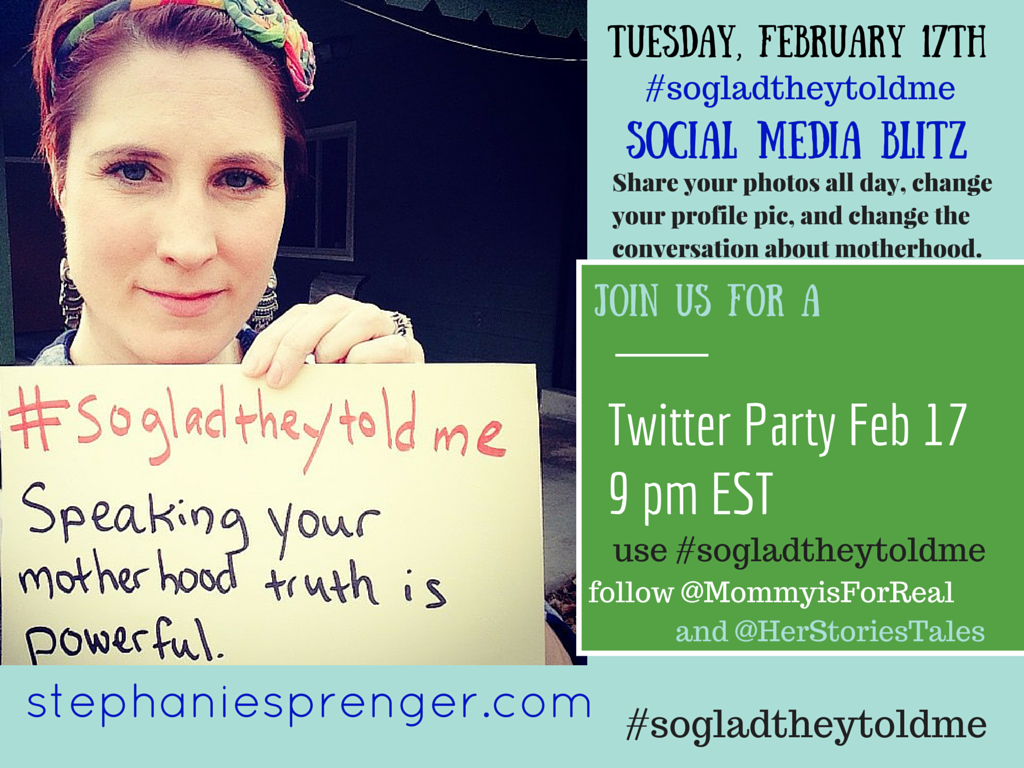 To participate in the Twitter party, follow @HerStoriesTales and @MommyIsForReal and use the hashtag #sogladtheytoldme. It’s easiest to use TweetDeck and make a column that follows the hashtag! We can’t wait to reveal our next project and call for submissions!

You can find all the media links and updates on #SoGladTheyToldMe right here. We hope you’ll join in on February 17th by making your own sign and sharing your photo! Here is a photo gallery for inspiration!