It’s been more than a month since My Other Ex released! Recently we asked our contributors to reflect on the experience of writing, editing, and submitting their essays, as well as becoming a part of the HerStories Project community and their future projects. 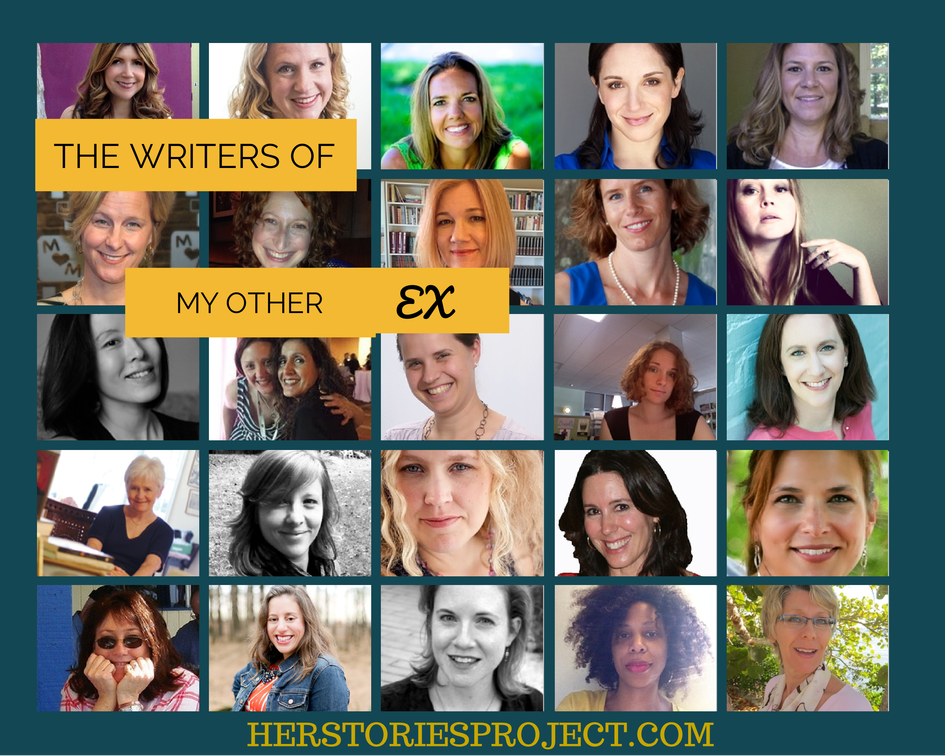 How long did it take you to write and edit your essay for My Other Ex? Did you receive any feedback on it before you submitted it?

Elline Lipkin: About three weeks.  Got great feedback from a local writing group I belong to.

Alyson Herzig: It took me about a month and I worked with a professional editor.

Katrina Willis: I wrote the essay in an afternoon and tweaked it for about a week or so. I didn’t let anyone read it before I submitted, and I didn’t tell anyone that I had submitted — not even my husband.

Jennifer Simon: Maybe 3 months? My husband and two writer friends all read and edited it.

Alethea Kehas: Not too long, since I adapted it from my memoir manuscript. It underwent some editing in the earlier stages.

Did you have any concerns about privacy, about protecting the identity of the characters in your essay, and about your essay affecting your present relationships? If so, how did you deal with your concerns?

Shannan Younger: I did, and while I had a few different friendships in mind to write about, I selected the one that would least impact present relationships. I did feel like I should tell my subject that I wrote about her, but my efforts to find her have been unsuccessful.

Katrina Willis: I wasn’t concerned about privacy. As a blogger, my life is pretty public, anyway. But my former friend and I do have mutual friends, and I was concerned about their reactions. My intent was not to defame, but to present my own feelings, my own viewpoint. I fully understand and respect that she has hers, too.

Estelle Erasmus: No. [My friend] Laura was involved every step of the way. I even changed some of the sentences based on her input.

Alison Lee: Yes, because I reconciled with the friend I wrote about. I asked her first if it was alright if I shared our story (she’d read the blog post I wrote), and she said, yes, go ahead! She also read the final draft before I sent it in for submission. I did change her name.

Other than your own, which essay resonated with you most deeply? Why?

Shannan Younger: Alethea Kehas’ story of tween struggles may have struck a chord with me both because of my experiences and because my daughter is in junior high now and I write about tween issues. She captured the pain that tween girls can cause each other, and it made me think about her mother, too, in terms of both what Althea did and did not share with her and her reaction. It hit home on multiple levels.

Estelle Erasmus: I would say Alexandra Rosas’ because she just wouldn’t get that the woman didn’t want any kind of deep friendship with her. She was lonely and I remember being so lonely in the beginning of motherhood when I hadn’t yet formed any kind of community. It was hard and I could definitely see my feelings leading to that kind of desperation. I actually grabbed a guy who had a baby girl my daughter’s age in the elevator of my building and asked (or was that demanded ) for  him to have his wife call me. She was my first mom friend and my story is a happy one. Although she has moved away, we are still friends to this day.

Alyson Herzig: “Girls Interrupted” by Alexis Calabrese touched me deeply. Having a son with autism has taught me that many people don’t know what to say or do. For years others fell by the wayside leaving him and us looking in. I felt her pain when she realized that her friend had diminished her child and his life through the heartless play her husband had put on. Her friend Erika’s lack of understanding and compassion resonated with me, because I have lived that life. I live that life now.

Sandy Ebner: Each of the essays touched me deeply so it’s very difficult to single out just one. However, Alison Lee’s, “The Internet Breakup” really hit home for me because I’m going through something very similar to what she describes in her essay.

Katie Sluiter: Oh gosh. This is a hard choice. I am going to pick Arneyba Herndon’s because I laughed and got angry while I read it. I mean, if I was there, I would have at LEAST saved her sandwich for her!

Lea Grover: I think “Delilah.” The narrator was very much me, at the beginning of middle school. Unlike the Delilah of the story, though, my friend became incredibly abusive, and dominated my life for years. That story broke my heart, because there were so many times I wish I’d just disappeared and broken our friendship instead of sticking around, and the sense of regret in there about doing it kind of healed something in me that’s been broken for a long time.

What have you enjoyed most about being a part of this anthology?

Shannan Younger: My favorite part has been hearing the stories from contributors of how they have heard from friends and sometimes reconnected, of being reminded that people change and that there’s hope for some people on whom we have given up.

Estelle Erasmus: The leadership of the editorial team, Jessica and Stephanie. They have gracefully and graciously navigated us through the publishing journey with them and in the process we have met and befriended each other.

Alison Lee: Everything. The thrill of seeing my name in print, of being part of the project alongside 34 other amazing writers and two incredible editors. Reading the reviews has been wonderful, learning about the reviewer’s stories and their thoughts about friendship. I’m just so proud to be part of this anthology.

Alexandra Rosas: Being able to no longer carry my story inside of me. I felt freed.

Sue Fagalde Lick: The sisterhood that has developed among the writers.

Alyson Herzig: The interaction with so many wonderful and amazing ladies that are outside my normal genre. I have been humbled by the credentials of the others. I have also been enjoying the camaraderie.

Lea Grover: Realizing that there is a much higher standard I should be holding myself to as a writer, and aspiring to do that.

Katie Sluiter: Other than the fact that I now have my own author page on Amazon, I have really loved the new connections I’ve made with the contributors. We are all pretty diverse, but this one thing – losing friends – has brought us together. It’s a pretty cool thing.

What is your advice to other writers who hope to get published in anthologies?

Alyson Herzig: Even if it is not your normal genre you should submit. Let your readers see all the many facets of you, not just one. It expands your base and builds a solidarity with a group of women that you most likely would not have had otherwise.

Kristin Shaw: Try, and try, and try again.  First, polish your work before it’s submitted – it’s hard to see the mistakes in your own essay, and you become melded to the words you have created without looking at them objectively. It’s important to find a few editors you trust to give you honest improvement suggestions.

Victoria Fedden: Look for calls for submissions that speak to your experiences. Then try to imagine what the most common submissions will read like and be about and write the total opposite so that your piece stands out. Any way that you can be original or unique or find a new perspective on the topic will better your chances.

Alison Lee: Write and submit. In writing your story, stay true to your voice. Edit brutally. Ask for feedback and be prepared to take any criticism, because they’re there to help you. Then submit. Don’t think that your writing or story isn’t good enough.

What are your current and future writing projects?

Elline Lipkin: I’d love to write both essays and more reported pieces for sites like the Atlantic and Slate (dreaming here!) about things/topics that affect women and girls.

Estelle Erasmus: I am working on getting some of my essays published that have been taking space in my laptop for years. I sort of put stuff on hold in the early years of motherhood, but now it’s time to take everything off the back burner and begin again. I was thrilled to be published on Marie Claire and that is just the start for me. I’ve also reconnected with some publishing mentors from my early career and I’m excited to see where that will lead.

Alyson Herzig: I am working on my Mental Healthy anthology, having just gone through all the submissions. It will be published in 2015.

Kristin Shaw: One of my essays will be featured in Bannerwing Book’s Precipice anthology in October, and I have written two chapters for Carolyn Savage’s new book series (she is an author and Today show correspondent) that will be released early next year.  I have written a children’s book with Kelly and Rick Dale from the History show American Restoration, and we’re hoping it will go to print later this year.

Sandy Ebner: I’m working on a short story about a Vietnam vet, and am getting ready to start a revision on the novel I’ve been working on for what seems like forever. I’d also like to do a collection of essays.

Victoria Fedden: I just finished a piece about postpartum depression and OCD and I am about to embark on my third memoir.

Jennifer Simon: I am publishing articles on various websites and working on my piece for the new anthology!

Alison Lee: I just had twins at 34 weeks, and I have many thoughts and emotions about our time in NICU. I plan to write a series of essays on this, as well as general experience with twins (and four kids!). I’m also keeping an eye out on future anthologies and other writing opportunities at various websites and magazines. I’d love to be published again!

Alethea Kehas: I’m working on some poetry and a Y/A book that would probably be in the category of Fantasy.

Katie Sluiter: I just submitted an article on using mental health issues in a secondary classroom (I’m an English teacher) to a scholarly journal. I am also working on an essay for the HerStories Project’s next anthology about Postpartum Mood Disorders.  And I’m always writing alongside my students. Since they will soon be writing personal narratives, I have started my drafts so they can use them as mentor texts as they start their drafting processes.

Alexandra Rosas: Hoping to have my collection of 35 short stories published under cultural memoir/Latina heritage.

Sue Fagalde Lick: I’m marketing a novel and working on a memoir about the years I cared for my husband through Alzheimer’s disease.

Do you have any questions for any of our contributors about their writing and submitting experiences?