This week we’re thrilled to publish a guest post by HerStories Project contributor Nina Badzin. Lots of women are enthusiastic members of their book clubs, but it’s also true that not every woman is looking for the same thing when she joins one. Have you ever been a “mismatch” with a book club that you’ve joined? Read Nina’s experience with trying to combine friendship and book clubs: 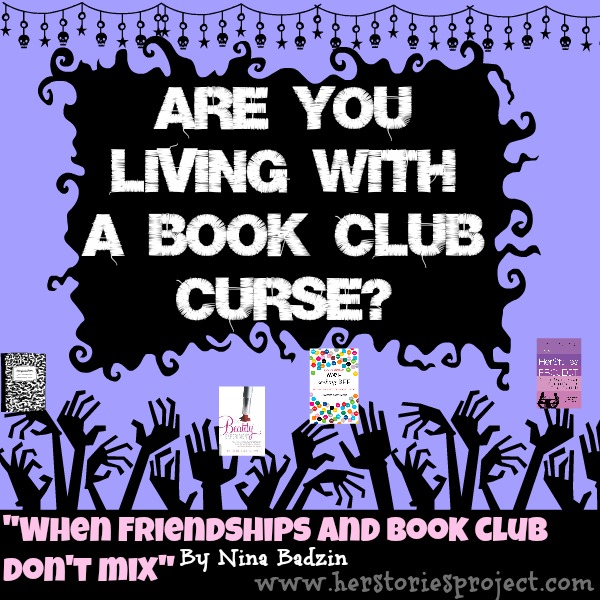 I always wanted to be part of a book club.

My initial desire started young when I observed my mom’s enthusiastic participation in one. However, I didn’t realize as a kid that my mom and her fellow book club members were brought together through a shared love of reading and nothing more. They were certainly very friendly on account of the book club, but they didn’t create the book club because they were close friends. The difference is significant, which took several failed book clubs for me to understand.

I started my first book club in the summer of 2000. I was twenty-three and had recently moved to Minneapolis where I knew my husband’s (then fiance’s) family and not another soul. In my fantasy of young almost-married life, I had to be part of a book club. Aside from the model of my mom’s club, I also had Oprah. The summer of 2000 was the heyday of Oprah’s book club. People were reading the same books all over the country, discussing them in cozy groups while sipping wine in well-designed living rooms. I wanted in! More than anything though, I wanted to make friends.

I created a book club as soon as I’d made two friends, and they invited others they knew. I remember not liking some of the novels we chose, but like my mother, I always finished so I could participate. My frustration when others didn’t finish or when we didn’t really discuss the book was palpable. Let’s just say I wasn’t the most popular woman in the group and instead of making new friends, I made people mad. Eventually I quit, which made me look like a snob (according to the unsolicited feedback that came back to me later). The experience was a disaster both from a book lover’s point of view, and as someone trying to make new friends in a new city.

I tried another group with some different friends the next year, but the same thing happened. We’d rarely discuss the book because not everyone had read it. Now before you think I’m completely anti-social, let me say that I do love hearing about everyone’s lives, catching up, and simply hanging out. But I longed for a book club where the women wanted to talk about the books. I mean really discuss them–like speaking over each other and having to eventually cut off the conversation when it gets too late kind of discussing. I was also a ninth grade English teacher then, which meant I already spent time forcing a discussion about a book as a job. I didn’t want to do that in my free time too!

Fast forward a few years. A friend of mine invited me into a book club with some women she’d known in high school. This book club didn’t work out for me either because those of us who read the book weren’t supposed to “ruin” the ending for the others. When I accidentally broke that rule, the group’s unofficial leader sent a scathing email to the entire group reminding us how “unfair” it was to spoil the ending. Any book lover will understand why I left that group immediately. I also realized that I didn’t want to be in a book club with a group of old friends–my friends or anyone’s.

Since then I’d been invited into other groups, but I’d always decline. In a smaller community like Minneapolis, I didn’t think I could afford to make any more bad impressions with people based on my desires to discuss the dang book.

However, two neighbors I was friendly with insisted many times that I try the neighborhood club. They promised that everyone in the group was an enthusiastic participator. And they were right! I’ve been in that group for two years now, and I finally found the club where I belong. The women range in age from 35 to 65, which helps keep conversation from lingering too long on subjects like potty training or even college visits. We are all at different points in our lives and come from a variety of backgrounds, but what we all have in common in any particular month is the book we read. Our differences bring layers to the discussion and bring up issues from the book that hadn’t occurred to me on my own.

As for friendship, of course after two years we’ve developed a friendliness above and beyond “fellow book club member.” I was incredibly touched when some of the women from the group carpooled to see me in the Listen to Your Mother show last year. And when an interesting author comes to town we have tried to make an outing of that, too. We’ve arranged for author visits as well either in person or via Skype. I must say it’s the perfect book club (for me) made even more wonderful by each host living no more than five minutes from my house. Luckily this book club saga had a happy ending!

Have you been able to create a successful book club with close friends or has your experience been more like mine?