We are excited to share an essay from Dana at Celiac Kiddo today. Dana shares her transition to new motherhood, and the women she was lucky enough to share this journey with. Dana has a fantastic blog- if someone in your family is gluten-free or has Celiac Disease, you should definitely check her out. And if not, you should still head over there, as she writes about motherhood in such an honest, entertaining way. 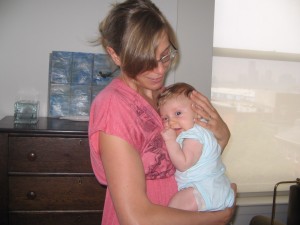 When I had my first child five years ago, I was lucky enough to have a momtourage. Together we were four brand new deer in headlights mamas struggling to figure out life post babies. For nearly a year we spent countless hours in each other’s homes, at cafes, and in parks while carrying, wearing, or strolling our new babies, trying to make sense of our strange new life. We talked, nursed, cried, advised, and confided. Our last time together was at my daughter’s second birthday, but we had begun to drift apart well before then.

Sounds dramatic, but it wasn’t. We were friends of proximity. The kind of friends that are drawn together because of shared circumstances. Our friendship was intense, as those kinds often are, born out of fear and the unknown, burning like fire until the flames die down.

I met my momtourage in childbirth class. About ten couples gathered every week for six weeks to listen intently to a neighborhood woman who had not one, but two babies (!) and was trained in such matters. I thought of her as a guru of sorts, someone who was supposed to reveal the secrets of the universe, which for our class of first time mamas-to-be was how the hell to have a baby. As the class wound down and our due dates approached, our teacher set up an email contact list. In the weeks that followed, we learned the names and saw the smushed up faces of the babies who had brought us together.

A few of us continued emailing after the initial announcements, and somehow less than two months after having my baby, I ended up meeting three of my classmates on a sweltering June day. The “oldest” baby was mine, at about seven weeks, the others coming in close behind. Though we were relative strangers, even after our six-hour course, that first afternoon we couldn’t talk enough. From the moment we walked through the door of Amy’s apartment with our tiny babies in tow, stories spilled out of our mouths. We tried taking turns, but it was impossible not to chime in and interrupt each other. It wasn’t rudeness, but excitement, and more specifically, utter relief at having found one another. New motherhood is like being airlifted and dropped into another country where you don’t know the language, geography, or the culture. You stumble along feeling totally shell-shocked until suddenly you run into another traveler who you understand, and better still, understands you. 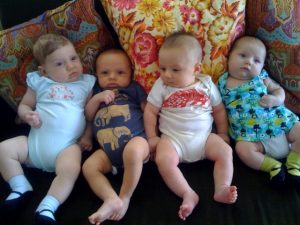 When you’re pregnant, labor and delivery seems like the penultimate event, but as we mothers all know, it’s only the opening monologue to a play that lasts the rest of your life. Those first friendships I forged in the fire of new motherhood saved me from losing my mind, and my sense of humor. Because right alongside the ecstatic joy of having a new baby is the utter despair upon realizing your “life” is irrevocably changed. Like, forever.

Even though we’re not all still in touch, I will always be grateful to these three women who made up my momtourage. Names have been changed, but the details are for real.

I remember picking up Hanna on the way to Amy’s home for our first official get together. I had warned her that my baby would probably scream in the car (as she did most of the time except when she was passed out on my body). Hanna took it in stride and sang the whole way while I drove white knuckled. She was always like that, kind hearted and easygoing, never making me feel self-conscious about my colicky baby. I will always remember how she unabashedly sang Old McDonald for the zillionth time to soothe my fussy girl while strolling down crowded city sidewalks, and for the countless moments of kindness she consistently offered, and continues to offer, to both me and my daughter.

My gratitude to Julie reaches back to the very first days of our friendship when she graciously invited my family to dinner at her home. Her husband is a chef, so considering our post-baby meals were almost 100% take-out, this was bound to be a real treat. But still I hesitated. Dinner hour was my baby’s prime screaming time, but Julie didn’t seem fazed. In the end, her laid back manner eased my anxiety, and my sweet yet high strung baby somehow followed suit and fell asleep on the car ride over. My husband and I were able to eat dinner while both babies slept angelically on the table beside our perfectly cooked lamb burgers. Soon after Julie and I enjoyed our first glasses of wine post partum while our husbands’ fed the babies pumped milk. It was my first moment of “normalcy” and I will never forget how good that meal tasted. Not to mention the wine. 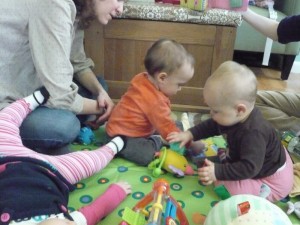 My gratitude toward Amy is all wrapped up in loneliness and a respite from loneliness. Just a few days before our babies were born, we met at a local bakery and politely exchanged stories. When she revealed to me that her son would be named after her mother, who had passed away years before, I nearly dropped my cupcake. My own mom had died shortly before I became pregnant, and that recent loss was still so raw. After our babies were born we mourned our mutual sadness, which was twofold: how our mothers would never hold our babies, and how our mothers would never know us as mothers.

Motherhood can be a lonely and isolating time. Motherhood without a mother perhaps even more so. There is something to be said about shared pain, and I will always be grateful to Amy for understanding my loss.

Loneliness might be powerful, but so is friendship. The stories here are only the tip of the iceberg. The rest lies beneath the surface and buoys me up, even now five years and another child later: a rock solid foundation of support, solidarity, and love.

Dana Schwartz is a writer living in Brooklyn, New York with her husband, two wild kids, and two neglected cats. She writes about her family’s journey with celiac disease on her blog, http://celiackiddo.wordpress.com