Marcia Kester Doyle suffered for many years from an anxiety disorder that evolved into depression, phobias, and an eating disorder. Recently, she acknowledged her need for help and found treatment.

This essay is Marcia’s story of her journey with an anxiety disorder. 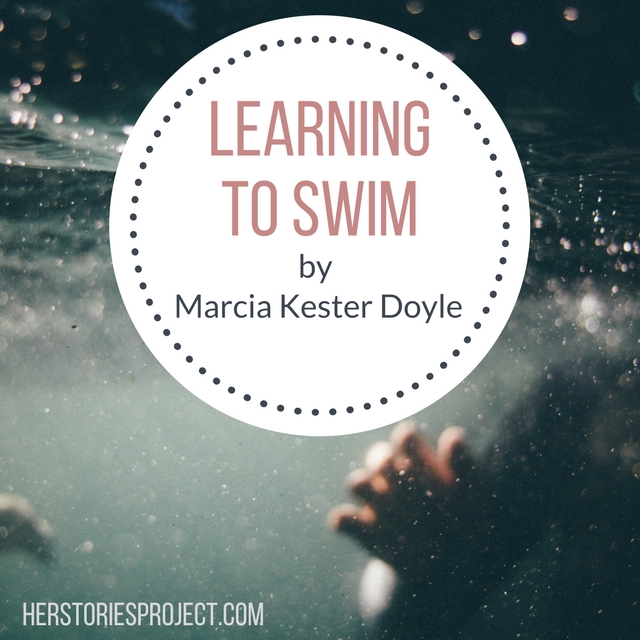 Clutching the door handle in the bathroom stall, I lean against the porcelain tile, the pink stone cool against my damp forehead. Above me, a fluorescent light bulb flickers and buzzes like a swarm of bees. I swallow hard against the tide of nausea that threatens to empty my stomach. Dropping my head between my knees, I suck in air, convinced by the staccato beat of my heart that I am dying.

An image of my father surfaces: I’m five years old, and in my father’s opinion, too old not to know how to swim. He secures a Styrofoam bubble to my back before carrying me out to the ocean. Wading deep into the water, he bobs up and down against the waves that hit his shoulders. He raises me above his head, counts to three, then tosses me into the water.

Terrified of drowning, I flail around helplessly in the murky water. “Keep kicking,” he shouts, but a wave flips me over, quickly pulling me under.

Everything is dark. Struggling against a strand of seaweed hooked around one foot, I fight to stay above the surface, but the current is too strong.

A hand reaches into the water and yanks me up into the sunlight. “You can’t stop kicking,” my father scolds. “Use your arms to stay afloat.”

I try again. And again. My stomach burns from the amount of salt water I’ve swallowed.

At the end of the day, I’m no better at swimming than I was when I arrived at the beach. Pulling a damp towel across my shoulders, I huddle against the car door as my father drives home in silence.

A stall door slams shut nearby, and the image disappears. Twenty people are waiting in the courthouse lobby near the women’s restroom where I’m hiding and trying to avoid having a panic attack. Twenty prospective jurors anxious to see who will be chosen to serve on a DUI trial.

Fighting to remain calm, I pacify myself with a number of excuses for leaving the courthouse in case the attorneys are foolish enough to think I’m capable of serving on a jury.

I envision myself walking through the lobby, down the corridor, and out into the sun where it’s safe. You’ve got this…just step out of the bathroom, hold your head up, and act normal so no one will know you’ve lost your mind.

Taking a deep breath, I push myself forward on shaky legs and exit the bathroom, my oversized purse swung protectively across my chest. The jurors have moved from their seats and formed a semi-circle around a man who informs the group that the case has been settled out of court. We are free to go home.

Relief washes over me when I spot my husband’s car outside by the curb. Watching him navigate skillfully through midday traffic, I try to remember the last time I drove on the interstate. Twenty years, at least, long before my anxiety manifested into a disability that robbed me of doing the simplest activities.

The anxiety was always there, swimming beneath a layer of feigned confidence in my childhood.

Bullied in school for being overweight and for wearing a patch over one eye for a condition known as Mixed Dominance (where my left eye was overly dominant and a patch was required to strengthen the right), I woke each morning with a tightness in my stomach; the same sense of dread I felt every Sunday when my father drove me to the beach. My inability to master the simple body mechanics of staying afloat in the water created a deep sense of failure, and with it, the weight of shame that pulled me under the surface. I developed a learning disability in school that prevented me from grasping mathematical concepts or retaining information from textbooks. I felt inferior to my peers — slower academically and insignificant in their eyes, but I was too afraid to confide in my parents, who believed I was just an overly sensitive child. They couldn’t possibly understand what I was feeling because I didn’t understand it myself.

When I started failing at school, my parents finally recognized that there was a problem. I was drowning in self-condemnation, experiencing the same sense of despair I felt when I was left kicking helplessly in the ocean during swim lessons. My parents sent me to a therapist for answers, but the weekly sessions only confirmed what I already knew: I was broken and unfixable.

I learned to adapt by avoiding situations that triggered my anxiety, like feigning an illness or lying about my schedule so that I wouldn’t be expected to engage in social situations that made me uncomfortable.

I prayed that my behavior would go quietly unnoticed and that my anxiety would disappear. But instead it spread, evolving into depression, multiple phobias, cutting, and an eating disorder that overshadowed my life. Whenever I felt overwhelmed by the pressure to be as attractive and independent as my friends, I would stifle the anxiety by binge eating. This was followed by periods of guilt, self-loathing, and suicidal thoughts. I was damaged and useless; if I couldn’t love myself, how could I expect anyone else to love me?

The year after I finished college, I went on my first blind date with a man who immediately set me at ease with his quirky sense of humor. Mac’s soft brown eyes, easy smile, and contagious enthusiasm won me over quickly. One night as we sat by the ocean, I told him that I was afraid of the dark water.

On impulse, I opened up to him, exposing my vulnerabilities, something I’d never done before. He listened closely without judgment while holding me close. It was his gentle love that slowly coaxed me from the depths, one step at a time, until I discovered how to be buoyant. His patience and positivity gave me hope that one day I’d learn to swim without the fear of drowning.

And it worked, at least for a while. After we were married, I managed to maintain a part-time job at home and raise four children. Everything was fine, as long as I stuck to a specific routine.

I fooled myself into thinking that I’d been “cured,” but the truth was that my husband had given me a sense of security by making sure my anxiety was never tested. He became my enabler, doing the grocery shopping, running errands on the weekends, taking the kids to dance, karate, and choir practice, and routinely taking time off of work to drive me to appointments. Despite all of his efforts, eventually it wasn’t long before the anxiety crept quietly back into my life like the stealthy wolf that it was.

The disorder had merely been hibernating under my guise as a functioning mother, when underneath it all, I was still living in fear of imminent disaster.

The onset of menopause compounded the disease, unleashing additional symptoms related to my panic disorder.

At one point, I couldn’t leave the house without checking the stove five times to make sure it was off. The front door had to be locked, unlocked, and locked again before leaving. And every time I sat behind the wheel of a car, my stomach clenched, my heart beating like a broken metronome.

The anxiety had become a tangible thing, a paralyzing entity that prevented me from doing the simplest tasks that others took for granted: putting gas in the car, picking up the dry cleaning, taking the kids to the pediatrician, visiting friends, or getting on an airplane. I could do none of those things, and my attempts at hiding my anxiety from my children and friends was exhausting. I was too ashamed to admit that I had a disability, fearing that if my family knew the truth, I’d be labeled as weak and unstable.

It wasn’t until the day I attended my granddaughter’s first swim lesson that I started to make the connection to my anxiety. Sitting by the edge of the pool, I watched as she blew several bubbles before slowly submerging her face in the water. Soon after, she was venturing off the steps and kicking confidently from the railing. With the help of her parents, she learned how to roll onto her back and float, trusting that they’d never let her sink. In a matter of weeks, my granddaughter was gliding effortlessly through the water like the mermaid she pretended to be.

Watching her progress in the pool, I realized that learning to swim takes time and trust, and with it comes confidence to navigate the water alone. If I trusted others to support me as easily as my granddaughter did during her lessons, I knew I could stay afloat without drowning.

Acknowledging that this disability is a part of me, yet not allowing it to define me, is an ongoing process that requires patience and courage — the same qualities my fearless granddaughter exhibited in the water.

Learning to let go of the safety rail to float on my own is the first step.

As I wade deeper into the ocean, my feet sink softly into the sand underneath. Trusting the water to keep me buoyant, I float with the current, my head above the surface, and take one breath at a time. 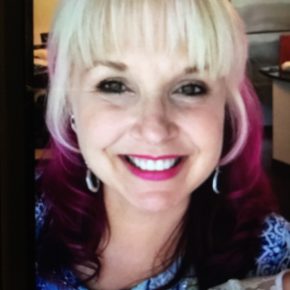 Marcia Kester Doyle is the author of the humor book, “Who Stole My Spandex? Life In The Hot Flash Lane” and the voice behind the popular midlife blog, “Menopausal Mother.” Her work has been featured on numerous sites, including The Washington Post, Cosmopolitan, Good Housekeeping, The Huffington Post, Woman’s Day, Country Living, House Beautiful, and Scary Mommy, among others.