During the final weeks leading to the publication of My Other Ex: Women’s True Stories of Leaving and Losing Friends, I learned about another soon-to-be published anthology about friendship breakups, Dumped: Stories of Women Unfriending Women

. The editor, Nina Gaby, reached out to us, and since then, we’ve been waiting anxiously for its release! We’re also pleased that Nina is one of our essay contributors to Mothering Through the Darkness, to be released, also by She Writes Press, in November.

We’re honored to have writer Allie Smith review the anthology for us! We think fans of My Other Ex will love this book….

Have you ever been dumped by a friend? Leave a comment below and enter our giveaway to win a copy of Dumped! 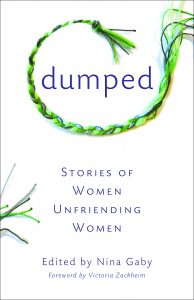 I am a girl’s girl. I love and cherish my girlfriends and cannot imagine my life without them. I’m fortunate to have an abundance of friends, some of whom I’ve known since childhood, and others whom I’ve only met in the last few years. Although I have lost a few friends over the years, I don’t think I’ve ever been dumped. I considered the possibility that perhaps this was a matter of interpretation, but I don’t think so. As opposed to losing a friendship through gradual erosion, being dumped is an event. The women in this book were most certainly dumped by their friends, and often times it was thoughtless and cruel.

Similar to the Her Stories Project’s anthology, My Other Ex: Women’s True Stories of Leaving and Losing Friends, this book is a collection of essays written by women from all walks of life who have stories to tell about losing friends. The authors are raw and candid and, above all else, brave.

The book is divided into five sections. In the first section, “When the Herd Turns,” the themes are about the hurt experienced when you feel like you don’t belong – when you feel like an outsider. In the essay “Off the Line,” Julie VanDeKreke was the new girl in school. Having once been the new girl, I easily identified with the nervousness she experienced when walking down the hallway on her first day. I’m still friends with the girl I met on my first day at my new school. I was lucky, VanDeKreke was not. She was a target on day one, lured into a false sense of belonging by two girls who pretended to want to be her friends, only to cruelly dump her weeks later, for no reason. Then they proceeded to torment her for weeks by incessantly calling her house and harassing her. VanDeKreke’s single father urged her to stand up to the girls and solve the problem, which she ultimately did – in grand fashion. I whooped at her solution, but still felt the pain of her isolation.

The next two sections of the book are about friendships that fell apart when the authors were older. Some of these essays were really sad, because even in the years when we’re supposed to be “above it all,” some women still behave as though they’re mean girls in high school. Unfortunately, I’ve witnessed this in my own life as well. Some of the stories appalled me, because of the manner in which the dumpers executed their final blow. One woman wrote a note saying she could no longer be friends, without any explanation other than, “It’s too hard.” That’s that, end of story. One “friend” had an emotional affair with her friend’s husband. One charmer sold out her friend by revealing personal information on Twitter. That particular drama involved Alexandria Goddard, the crime blogger who brought national attention to a rape case involving high school football players in Steubenville, OH. Residents of the town and fans of the team didn’t take well to all the negative backlash this garnered for their football players, and cared little about the rights of the victim. Goddard’s friend took it upon herself to let the angry masses know where Goddard lived. With a friend like that, who needs enemies?

The last two sections, “Women Remember” and “Making Sense of It,” take a more reflective tone. In some instances, those who were dumped were better off, although I’m sure it was hard to see while grieving the loss of friendship. Other writers realized after the demise of their relationships, that they could’ve been a better friend, as in the case of “Since I Don’t Have You,” by Jacquelyn Mitchard. The loss of a close friend caused Mitchard to evaluate all the relationships in her life. As a result, she changed the way she tended those relationships. She’s now more proud of being a friend than of having friends. She wrote, “Friendship for me is made from a tapestry of personalities, each of who shares a part of all I care about.” That line gave me chills.

Hands down, the most heartbreaking story is written by Ann Hood, whose life-long friend inexplicably disappeared after Hood’s five year old daughter, Grace, tragically died of strep. The friend made an appearance at the funeral – and that was it. Then years later, she quietly made a donation to a scholarship fund that was started in Grace’s name. She never personally offered her condolences and ceased being Hood’s friend. I cannot even fathom how someone walks away at a moment like that. Hood concluded with, “Her silence was loud, it breaks my heart.” Mine too.

This collection is not a light read, by any means, but it is an easy one. Every single contributor is gifted and eloquent with her narrative. I think, even if you haven’t been dumped, you’ll learn from this book. You will learn what not to do. You will learn that actions have consequences, consequences that can hurt for a life time. Treasure your friends. Treat them well. And if the time comes when you feel you can no longer be someone’s friend, bow out with grace and dignity. And for goodness sake, tell your friend why you’re done, even if only in a letter. Just please promise you’ll give your friend more than, “It’s just too hard.”

Allie Smith is a wife, mother of four, and freelance writer living in the suburbs of Atlanta. She’s a columnist for My Forsyth Magazine, a book reviewer for Chick Lit Plus, and a contributor to The Family Legacy Center. She blogs about parenting, autism, travel, and books at The Latchkey Mom.

Can you relate to these essays? Have you been discarded by a friend? Leave a comment below for a chance to win a copy of the book!